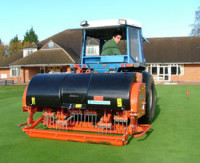 Sales of Wiedenmann's lastest deep aerator, the Terra Spike XF, launched in April and available in the UK since June, have exceeded all expectations. Maidenhead Golf Club is one of the clubs that have purchased this new machine.

Speed is the major benefit of the XF according to Chris Mitchell, head greenkeeper at the 108 year-old club. Chris and his team took delivery of a new Wiedenmann deep aerator midway through September and by early November had aerated all of the important areas of the course. The fairways were completed in just four days using 20mm diameter solid tines to a depth of 4"-5" and the greens with 12mm diameter tines to a maximum of 4".

"We used 10° of heave on the fairways and 5° on the greens. This helps to fragment the soil, allows air and water in, which helps the rootzone. We've also gone over the tees with the 20mm tines," he said. "It's a well engineered machine; it provides the operator with a much smoother ride; changing the tines is simple, but most of all, it's fast. This frees up time for other jobs."

Should the weather be favourable early in the New Year, Chris intends to work on all walk off zones and other areas with heavy usage. There's even a possibility that he'll use it on the semi-rough!

He concluded saying, "I'd heard that that the XF was quick, but I must admit that I was sceptical until I saw the demonstration. Having used it now for a couple of months it's a great asset and a real benefit to the club."