I have always been a fan of the industry shows, and a regular visitor to both Saltex and BTME Harrogate over the past twenty years. It is an opportunity for me to meet up with industry folk that I generally only speak to over the phone throughout the year. Therefore, for me, a visit is always a worthwhile exercise.

Saltex has always been a conundrum as far as I am concerned, and I have written, on a number of occasions, how the show needs to reappraise its offering - zoning of exhibitors, site access etc. From the heady days of the nineties and early noughties, when visitor numbers hovered around 15,000, the show has, in my opinion, been in steady decline.

Last year's attendance figures were c9,000, down from 11,000 the previous year. The drop in attendance was attributed to the

train strikes on the London Underground at the time, accidents on the M4, the 'big boys' not exhibiting and the current economic climate.

Fast forward to 2011 and visitor figures look likely to come in, again, at under 10,000 - they were quoted as 'just over 6,800' for the first two days. It is fair to say that Tuesday's atrocious weather will not have helped, but the weather on Wednesday and Thursday was set fair-ish. So, little or no increase in visitor numbers, even with the likes of Toro, Ransomes and John Deere back in attendance.

The IOG put out a plethora of press release prior to the show claiming, depending on which one you read, that there were over 400, over 420, around 440 exhibitor in attendance. I would contest those claims, and my facts come from IOG sources.

On the Saltex section of the IOG website 331 exhibitors are listed (as of today, Friday 9th September).

In the Saltex catalogue, exhibitor numbers were shown as 87 in the red zone, 96 in the yellow zone and 160 in the blue zone - a total of 343 - so where were the additional 80-100? Not at the show that's for sure, as the huge swathes of empty space around the site will testify.

And what of those visitor numbers? The IOG spin claims that visitors are now 'the decision makers', intimating that Head

Groundsmen are now not bringing their assistants due to the economic situation. Tell that to Dave Roberts at Charterhouse School, who attended on Wednesday along with his umpteen staff. Or the countless football head groundsmen with their assistants. Likewise, there were numerous local authority teams of six or more wandering the grounds in their corporate clothing.

Of course, in a gathering of over 300 exhibitors, the IOG will always be able to find success stories. David Jenkins at DJ Turfcare has already been wheeled out again for his annual 'successful show' spin. I don't argue that David had success at the show, that is what he is there for, after all.

In the press room on Thursday, I was in conversation with one of the exhibitors about the state of the shows. Our discussion was overheard 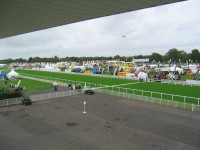 by the new BIGGA Chief Executive, Jim Croxton, who came to give us his take on the matter. Having recently released a joint statement to the industry stating that; "The Institute of Groundsmanship (IOG), The British and International Golf Greenkeepers Association (BIGGA) and the Agricultural Engineers Association (AEA) under the independent Chairmanship of David Gwyther of the Horticultural Trades Association (HTA) have, as the Grounds and Turf Care Industry Forum (GTCIF), conducted an extensive review of trade events for the sector."

The GTCIF go on to state that; "HTA's independent and objective analysis of the industry's two main shows has made it clear that there is, in fact, little real overlap in target markets and each has a distinct sectoral focus. Merging them in somewhere like central England would only increase costs. There is no market appetite for further, new shows."

So, I was interested to learn how that decision had been made and whom the GTCIF had contacted during their 'extensive 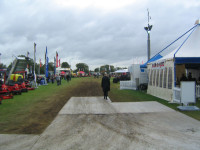 review'. They had, as it turned out, never contacted the exhibitor I had been talking to; incidentally, one of the leading suppliers in the UK and Europe. Further investigations suggested that none of the exhibitors I spoke to had been asked for their views. Jim Croxton's comment was "to be honest, that is just PR speak".

Mr Croxton went on to say; "Do I think that, in ten years time, Harrogate and Saltex will still exist? Probably not. Could BIGGA survive without Harrogate Week? Yes, but cuts would need to be made."

Mr Croxton also explained the demographic of visitors to Harrogate, but suggested that it was unlikely that these would be made available to the trade!

"There is no market appetite for further, new shows." Correct, but there is an appetite for change. You only have to talk to exhibitors and visitors to understand that.

"Lies, damned lies, and statistics" is a phrase describing the persuasive power of numbers, particularly the use of statistics to bolster weak arguments.