Hong Kong Stadium's new HK$31m pitch had its first workout on Saturday and it was difficult to see where the money was spent, with the turf almost instantly tearing up badly on day one of the Asia Rugby Olympic Sevens Qualifier tournament 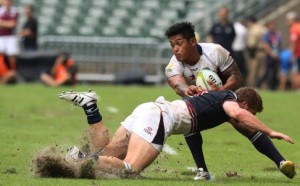 The stadium has been closed since April 1 to facilitate the installation of new turf.

This weekend was the first time an event was played on the new surface, installed by the Leisure and Cultural Services Department with funding from the Hong Kong Jockey Club Charities Trust.

The old pitch had long been seen as unfit, culminating in an embarrassing fiasco at the Barclays Premier League Asia Trophy in 2013, when the then Tottenham Hotspur manager Andre Villas-Boas threatened to pull his team out of the tournament, fearing his players would be injured.

But no lessons seemed to have been learned as the new pitch began throwing up huge sandy divots almost straight from kick-off.

Throughout the day, workers had to come on to try to repair the gaping holes during breaks in play.

A spokesperson for the Leisure and Cultural Services Department said "considerable damage to the new turf after around 50 vigorous rugby matches" had been anticipated. The department will continue to observe the turf condition and work out a post-event maintenance plan.

The pitch is expected to be closed for four weeks for patching up and turf maintenance, as in previous Sevens events.

Last month, the department said the much-anticipated soccer World Cup qualifier between Hong Kong and China on November 17 could not be played at the stadium as the pitch would not be able to cope nine days after the rugby qualifier finished, prompting derision and anger from many fans.

The qualifier will now be played at the 6,600-seat Mong Kok Stadium rather than the 40,000-capacity Hong Kong Stadium.

A new drainage and irrigation system was installed under the pitch by the department, but it seems the surface on top is no better than the old one.

One pitch expert watching the rugby qualifier claimed in emails to the Post that the reason for the damage was that the department had gone back to the same sand-and-turf-based pitch system with "Netlon" mesh provided by a company called Strathayr, rather than using a system combining grass and artificial turf commonly employed in many stadiums.

For the original article, visit www.scmp.com.