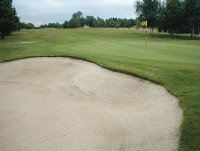 A bunker, generally sand filled, is positioned within the layout of a golf course to be a hazard to play - often referred to as a trap or "just a damned nuisance".

An architect would take the view that bunkers, strategically placed, encourage the golfer to think about the shot to be played. Fairway bunkers are often referred to as "positive features", designed to make the golfer think about where to place his shot. To lay-up short and have a longer second shot to the green or to accept the challenge, clear the hazard and be in a better position for an easier second shot.

The changes in golf club and golf ball technology have sometimes necessitated the movement of bunkers to bring them back into play. I find it fascinating that higher handicap golfers sometimes object to bunkers being moved on the basis that they have become popular bunkers - but unfortunately penalising the less able golfer, who, it is often said, "carries his own bunkers around anyway".

It is essential that the golf course is set up to challenge golfers of all categories. Greenside bunkers, on the other hand, are generally regarded as "negative features", not necessarily positioned to make the golfer think about where to hit the ball, but certainly there to penalise a badly executed shot.

The bunker used to be referred to as a hazard; an area of the course best avoided if you were looking to compile a good score. Unfortunately, the modern game has changed our perceptions of bunkers and how they should be presented. Golfers now expect to be provided with a playing surface, where the ball should lie "fairly" in a greenside bunker and able to play a shot to the green.

This, to a large extent, has been fuelled by the professional game where a player may elect to play and finish in the bunker rather than miss the green and be more heavily penalised in deep rough.

Whatever the whys and wherefores of this debate, there are still some fundamental aspects of bunkers that need to be considered:

Depending on the style of golf course, age and maintenance regime, bunkers come in all shapes and sizes and there are no hard and fast rules as to which one is correct. However, a number of parameters apply:

• Where mechanical rakes are used the bunkers must be accessible, generally bowl shaped but with no appreciable face, which cannot be covered by the bunker bike. Obviously, bunker edges are finished off by hand but a mechanised bunker bike should adequately rake the majority of the bunker. The benefit of a mechanical rake compared to hand raking is uniform consolidation of the sand, an even depth of raking and speed of operation, which generally permits bunkers to be raked on a daily basis with limited staff.

These shallower bunkers have performed well through this past summer, where extremely heavy rainfall has caused significant wash down of the faces and necessitated considerable effort to restore sand on the bunker faces, only to be repeated again the following week. • The base of the bunker should be shaped to collect water for drainage. A significant problem for bunkers is that of drainage, which must be high priority if the bunker is to remain in play through very wet weather.

Drain lines should be installed centrally in a drain trench, having a uniform fall of at least 1 in 200 to connect with a suitable outlet. Bunkers can be drained to a sump point or soakaway, but only if the lower soil profile has good drainage characteristics. There is little point in putting in a soakaway which quickly fills up and the area becomes a pond.

Traditionally, the drain trench is backfilled with clean, hard aggregate of 8-10mm diameter to within 50mm of the bunker floor. To prevent migration of sand particles into the aggregate, a blinding layer of coarse grit can be laid over the gravel, level with the bunker floor. Alternative methods of blinding are the use of upturned thatchy turf which creates an excellent barrier to sand infiltration into the drains, or one of the newer imports from the US (Sand Trapper) which creates a barrier to backfill contamination while allowing the sand to bed in.

• The general shape and size of the bunker must be in keeping with the hole. It is at this point where the employment of a golf course architect would be beneficial to advise the club on a professional basis. Repositioning of bunkers needs careful thought and must be sympathetic to the original architecture. 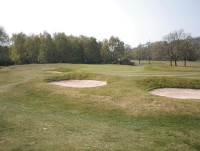 One of the most contentious subjects with bunkers is the choice of sand. There is no perfect formula and the final choice is generally a compromise between the material having suitable particle size, shape, colour, freedom from lime and cost. If a bunker is to provide a fair hazard, it is important that, when a ball lands in the sand, the surface is neither so hard that a ball bounces out or rolls, nor too soft that the ball plugs to an excessive depth.

The sand should be stable under foot and of a consistent depth. Specifications to meet the above requirements have been developed in the United States and trials carried out at STRI merely confirm these figures to be acceptable.

The recommendations state that sands are required to have 95% of their particles between 0.125 and 1mm diameter range, with the majority of particles falling between 0.25 and 0.5mm diameter. This is not to say that any sand which falls within this range will be excellent bunker sand.

What it does indicate is that sand falling within this range will have a better chance of being a good bunker sand rather than one that falls outside this range. Particle sizes larger than 1mm can have problems associated with blunting of mowers etc., and a large amount of particle sizes below 0.25mm are prone to wind blow and can restrict drainage movement.

One of the main reasons for compiling this article is to raise awareness in respect of bunker sands that will no longer be available in the future, and alternatives will need to be found. The very popular Moneystone bunker sand (WBB Minerals) will not be available within the next two years and PS White (Banks Amenity) is now no longer available. 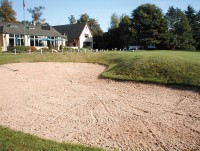 t is important to appreciate that the quality of playing surface will vary depending on moisture retained in the sand, and playing characteristics will also change between winter and summer. I believe that there is no perfect sand which plays consistently under both wet and dry conditions.

It was interesting to note that pop-up irrigation heads have been placed in the bunkers at Wisley Golf Club and Carnoustie in order to try and achieve a level of consistency. This really is taking the concept of bunker management to its ultimate.

I also believe that, where new bunkers are constructed, the new sand must have time to 'bed-in', i.e. settle and weather, in order to produce the desired playing surface.

As a point of reference, I visited a golf club a few years ago where they had embarked on a bunker reconstruction programme. Three years into the programme, members were beginning to question the quality of playing surface which, in some cases, was very good, in some, somewhat indifferent and, in others, rather poor.

Golfers must, therefore, be patient with the restoration programme being undertaken. In an ideal world, a bunker renovation programme would be carried out within a two to three year period to try and maintain a level of consistency.

Having selected the right bunker sand, and allowed the material ample opportunity to bed in and weather, the most significant factor affecting the quality of playing surface is that of maintenance. Depending on the sand selected, the bunker sand should be placed no more than a consistent 100mm firmed depth over the whole bunker floor. Where a sand face is provided, the sand on the face itself should not exceed 50mm. The ideal playing surface provides a sand which is slightly moist and well firmed, but with the immediate 25mm of surface raked-over into which the ball will sit.

One of the greatest influences on playing quality is the level of maintenance applied to bunkers on the course. Courses where bunkers are tended on a daily basis, providing consistent depth of sand, quality presentation, etc. have fewer complaints about the playing surface compared to those where the bunkers are raked once or twice per week. If, as a club, you are experiencing excessive complaints from the members in respect of the quality of the playing surface, the first point of reference should be frequency of raking and not choice of sand. If infrequent raking is the norm, try raking bunkers daily for a period of two weeks and gauge members' comments after that period.

Manpower is often a limiting factor to raking daily, but the trial period may prove that there is little wrong with the choice of sand and, if members want better bunkers, there may be a need to employ additional manpower to achieve the level of performance required.

If, however, the increased level of raking has not changed the playing characteristics and uniformity of playing surface, an alternative sand may be appropriate.

For as long as there are bunkers on a golf course, there will always be controversy over size, shape, placement, need, type of sand used and depth. Often, low handicap golfers prefer one type of sand, higher handicap golfers another and, if you can please 51% of the membership with the sand that you have, I wouldn't change.

It is my opinion that we have forgotten the concept of a bunker, which is to penalise a bad shot, or at least make the golfer think about the shot to be played. In the past, golfers were expected to play the ball 'as it lies' and, invariably, the bunker had not been raked. Where bunkers are tended daily, presentation is always of the highest order and we can achieve, in theory, a more consistent depth of sand.

The main problem may be that you do not have a consistent base to start with and this should be addressed as part of a development plan. There must also be an acceptance that we will not provide the ideal playing surface for all members all of the time, but we can adhere to the parameters set out above to give us the best opportunity.