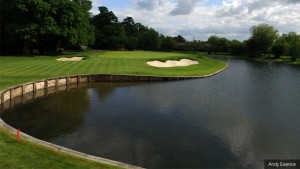 The project has been led by golf course architect Tim Lobb, who worked closely with course manager Andy Ewence to complete the work.

Golf Course Architecture magazine caught up with Lobb and Ewence to discuss their work and find out how the work has been received by golfers at the Buckinghamshire.

"We spent a lot of time analysing the course and understanding the playability and challenges," Lobb explains. "The course, which was laid out and designed by the late John Jacobs, is an excellent routing but was bunkered in a very 90s fashions where large, elongated, flat bunkers adorned both sides of the fairway and green. This resulted in a quite a routine playing experience for the golfers."

Lobb tried to create a new bunkering strategy that encouraged stronger players to take tighter lines to the course's hazards.

"That would reward them with more open approaches to the greens," he says. "Greenside bunkers were rebuilt closer to the green edges and made smaller to concentrate on penalising the slightly missed shot, rather than penalising a very poor approach."

"Many of the large fairway bunkers were removed and replaced with strategic bunkering on the corner of doglegs, or fairways were widened to give a central bunkering hazard. This is evident on holes five, six, eleven and eighteen," Lobb adds. "During the site analysis, it became apparent that much of the bunkering was found to penalise the shorter player hitting a weak slice. We looked to remove these hazards and returf with either fairway or fescue rough grass."

As well as the changes to the course's bunkers, a new Toro irrigation system has been introduced and new back and ladies tees added on numerous holes. Some green edges have been extended, while new cart paths were put in place and timber edge lake walling added on the seventh and eighth holes. 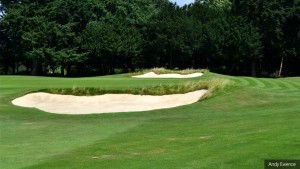 "All the bunkers were lined with Blinder bunker liner system to keep a consistent bunker sand and prevent sand contamination," says Ewence. "The Toro irrigation system we have installed is to the highest specifications, with 1275 sprinkler heads, soil sensors in some of the greens, new tanks and a pump set."

Lobb says that he believes the project has helped enhance the playing strategy for all levels of golfers at the Buckinghamshire Golf Club.

"The overall bunker size has been reduced from 14,000 sq m to 6,000 sq m, yet the visibility and presence of the bunkering has been greatly enhanced due to more raised bunker faces and bunkering that is now in play," he says. "The lake works to holes on the seventh and eighth holes has given a great style to these holes and with the remodelling of the eighth hole to enlarge the fairway left of the lake, we feel a new tempting short par four over water has been created."

Ewence concurs, saying: "I now feel the golfer will get onto the tee and think about their shot more, instead of just getting the driver out on most holes as they have in the past. All the bunkers now have some character about them due to the raised faces and tall fescue grasses that have been turfed around them."

With the course now having reopened for play, what kind of feedback have golfers at Buckinghamshire Golf Club been providing?

"The response has been amazing, especially after the second phase of works," Ewence says. "When we first started, the members were very apprehensive, especially those that had been here for a long time, as many people don't like change. They all love the changes with no bad comments and there is a real buzz about the club, with many members feeling we have really progressed as a golf course now the works have finished. Membership is very strong this year with many new members joining because of the changes and seeing the club invest in so many different aspects of the course."

If you would like to view the original article from Golf Course Architecture magazine please visit HERE.