by Charmian Robson
in Rugby, Machinery & Mechanics, and Industry News
on 11 Aug 2016 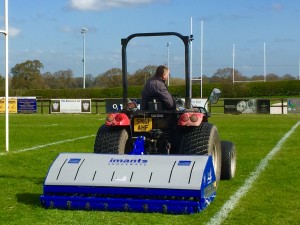 As well as using the Imants ShockWave - provided by Campey Turf Care Systems - on their own site, Sandbach Rugby Club plan to hire the machine out with an operator to generate extra-income, allowing the machine to pay for itself.

This approach is being adopted by an increasing number of grassroots clubs who have seen machines, such as the ShockWave, as an investment that can be self-sufficient, allowing them to purchase higher-quality machines.

For groundsman, Richard Vaughan, the money spent is not only an investment in the pitches, but also on himself, and he looks forward to the end of the 2016/17 season when he's confident the ShockWave will have shown everyone what it can do.

"The club are investing in the club, the pitches, and me," he began.

"That puts a certain amount of pressure on me to make sure I make the correct decisions, and I'm confident that I'll be able to tell them at the end of the season that we got all of the fixtures on due to the ShockWave.

"The club are also looking to rent the machine out to local golf courses and other sports teams, and we hope that the machine will pay for itself in the long-run, rather than sitting in the shed whilst it's not in use.

"I think this method of doing things will be very beneficial for the club, because it has allowed us to invest in a high-quality machine that by improving the pitches will bring wider benefits to the club."

As a consequence of the club's reputation to produce good playing surfaces, the number of games has risen steadily over the five-years that Richard has worked there. However, the higher level of use led to some maintenance issues, with compaction the main concern on the five full sized pitches and the junior pitches.

In response to this problem Richard and the Grounds Secretary, Rob Perkins, began extensive research into the best machine available decided that an Imants ShockWave was exactly what they needed to relieve compaction, and keep the surfaces at the high-standard they wanted throughout the season.

"We have a compaction problem on the pitches that's mainly down to increased use through extra games and competitions," Richard explained.

"During the five years I've worked here we've seen an increase of teams coming to us during the winter to play their games because they can't get on their own fields.

"But, the more play we had the more compaction we had, to the point where we had to do something about it, which then lead us to the ShockWave.

"The machine is good us for us because it does exactly what we need it to do. It gives me the ability to carry out constant decompaction throughout the year, so there won't be a point during the season where it becomes a problem.

"We are able to play the same day that the work is carried out, which is a big benefit for us due to the game schedule we've got."

The fantastic results the club has already seen from the machine allows visiting teams to see the difference it has made in maintaining the pitches, whilst furthering the prospects of local clubs wanting to use it to tackle compaction on their pitches.