0 Sangster at the double at BIGGA national championship 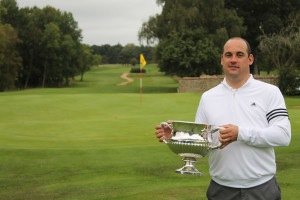 Gordon Sangster has completed a remarkable double by winning the BIGGA National Championship sponsored by Charterhouse and Kubota.

The assistant greenkeeper from Cathkin Braes Golf Club in Glasgow was victorious at the Scottish National in June - and he followed this up with a thrilling one-shot triumph at Frilford Heath Golf Club to win the coveted BIGGA Challenge Trophy and an improved first prize of £500.

Plus two handicapper Gordon had led overnight after a fantastic two under par 70 in his first round, and fought off fierce competition from the field to win by just one shot with a gross 147.

In fact, only four shots covered the top five gross golfers showing the depth of the Association's golfing talent - and there was even a hole in one on the first day when Paul Davy from Porters Park Golf Club aced the 186-yard 9th with a six iron.

Gordon said: "It's always good to win. I think I drove better than at the National last year but at this level it's one or two putts that make or break you, the scoring was so close. I birdied the last three holes on the first day which put me in a good position.

"It's a fantastic course - a tough but fair test of golf. The greens are the fastest I've played on all year and the whole set up is phenomenal."
The runner-up was James Dair from Toft House & Golf Course who shot a superb 70 on the second day to finish with a gross 148.

Daniel Scott from Woburn Golf & Country Club won the BIGGA Challenge Cup for the best nett score with 140 which was rewarded with £150.

Thanks to all the golfers who travelled from far and wide to play, to Sid Arrowsmith MG and his team for presenting a first-class course and to the sponsors Charterhouse and Kubota for their kind support of the event.

Team prizes - Day One Only