0 Sanli Back at Saltex with extended product range 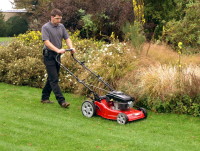 Outdoor power equipment specialist, Sanli, will be making its second-ever appearance at Saltex with an expanded machinery display which will include several completely new additions to the Sanli product portfolio as well as a number of machines not seen before in the UK.

For smaller grass areas, Sanli will be unveiling a brand new 42cm (17in) rear roller rotary mower which will be available in self-propelled and push versions. 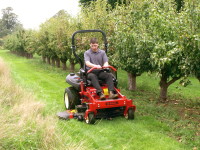 Two other Sanli pedestrian mowers being shown for the first time at Saltex 2011 in final production form are the LSP513 and LBP513 three-in-one rotary mowers powered by 5.5hp Sanli 550 OHV and 5.5hp Briggs and Stratton DOV 750 petrol engines respectively.

Combining cut and collect, cut and drop and cut and mulch capabilities in a single 51cm (20in) cut machine, the two mowers are identical apart from the engine and the price, with the Sanli-powered LSP513 costing just £315.83 (excl. VAT), £100 less than the LBP513.

In the rider mower sector, Sanli is extending its zero-turn offering with the launch of the all-new ZTB122, powered by a 22hp Intek V-Twin petrol engine. This model complements the new in 2011 diesel-fuelled ZTSD122 zero-turn mower and shares the same robust 1.22m (48cm) side discharge or mulch cutter deck.

Also making its debut at this year's show will be the TBH106 garden tractor featuring a 17.5hp Briggs and Stratton petrol engine, Kanzaki hydrostatic transmission and electro-magnetic drive clutch for its twin-bladed mulching 1.07m (42in) side-discharge cutter deck.

New SANLI two-stroke machines being launched at Saltex 2011 include a pair of back-pack blowers, additional chainsaws, new hedgecutters and a multi-tool with interchangeable articulating hedgecutter, grass trimmer and power pruner heads. The company will be showing also a selection of Sanli petrol engines suitable for use by OEMs and as service replacements.

Sanli's impressive covered stand will be located in the same position (W44) as in 2010 when the company made its Saltex debut. A dedicated machinery demonstration area will be laid out alongside the main Sanli stand on plot W46.