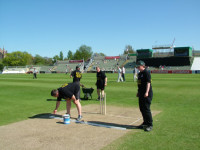 Whilst driving back from Gloucester last Friday, having just passed Junction 6 on the M5, I received a phone call from Tim Packwood, the Head Groundsman at Worcestershire CCC. Tim had read the article about female groundstaff at Wellington College in the latest edition of Pitchcare magazine and was keen to tell me that he had just taken on a girl to work at the County Ground. He asked if I had the time to pop in and meet her. As an added bonus England A were playing Sri-Lanka on the second day of a four day match so, being only 20 minutes away, I duly turned around and made my way to the ground. 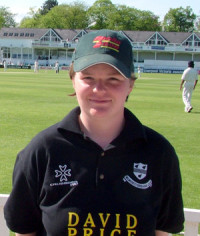 On arrival I was welcomed by the parking official and found a place to park. My timing couldn't have been better, I arrived at 3.40pm, tea break for the players. I made my way onto the field to find Tim and his staff re-painting the batting creases and tidying up the pitch.

I was introduced to his latest recruit, Sarah Addison aged 20, a student in her second year of a National Diploma in Sports Turf Management at Myerscough College. As part of the course students have to get over 400 hours work placement experience. With a keen interest in cricket she applied to several clubs and was successful in securing an interview with Tim.

At the time Tim was looking for a replacement member of staff and it seemed like a good opportunity to take on someone with college experience, giving them a chance to prove themselves.

Sarah has been with the club for a month now and has already proved herself to be hard working and keen to learn new skills. She has been mowing the net pitches, rolling the practice net areas and moving covers and sheets along with many other tasks.

In the short period she has been with the club she has experienced and been involved with the preparation of two one day matches and two four day matches, including the England A game against Sri Lanka. She has also had the good fortune of meeting up and speaking to Freddie Flintoff, who was at the ground getting some batting practise in the nets that she helped prepare.

Sarah has now experienced and seen for herself the hard work that goes into preparing and putting on an international cricket match at Worcestershire CCC. Work begins at 7.00 am moving covers, rolling and marking out. 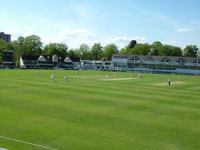 The impression I got from Tim was that he was pleasantly surprised by how well Sarah had adjusted to life at the County Ground, and had special praise for her hard work and caring attitude towards the job.

He believes if she can continue with the same enthusiasm for the rest of the season, she will go away with plenty of skills and experiences that will stand her in good stead for her college course and her future career in the sports turf industry. Who knows she may even go on to be the first ever Test Ground Groundswoman.

Also, we must not forget Tim's role and that of Worcestershire CCC in supporting Myerscough College and its students. The students need help to gain practical experience of working on grounds on a day to day basis and in match conditions. It is a good sign for the industry when the professional clubs and senior Groundsmen are leading the way.

Sarah was keen to point out that she fancied working abroad, perhaps in Australia or New Zealand, once she had passed her Diploma.