Scarborough Cricket Club groundsman John Dodds has claimed the glory at the ECB Groundsman of the Year Awards for the third year in a row. 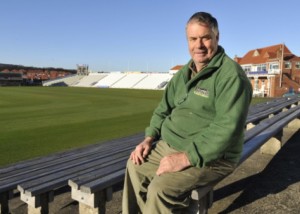 The Scarborough groundsman said: "I am delighted to have won it for three years running.

"I think the fact that I am preparing pitches that Yorkshire CCC are enjoying playing on is the key factor."

ECB's Chief Operating Officer Gordon Hollins said: "These awards recognise the outstanding job our county groundsmen do every summer to ensure our domestic game is played on the best possible surfaces nationwide.

"We thank them all for their tireless work and dedication to their task and warmly congratulate the winners in the different categories."

Every pitch is rated at the end of the match by each of the umpires with these ratings used as the basis for making the awards.

Nigel Gray from The Ageas Bowl was named the winner of the four-day category at the ceremony in Worcester with Gary Barwell and Andy Fogarty from Edgbaston and Headingley respectively sharing the runner-up prize.

In the one-day category, the winner was Neil Godrich from the County Ground, Derby with the runner-up prize awarded to Northampton's Paul Marshall.

For the full article from Whitby Gazette click here.