Like many sports clubs across the country, Scarborough Rugby Union Football Club began in extremely modest circumstances, supported and nurtured by the local community.

Since its inauguration in 1926, the club has had several 'homes' but the longest standing by far was in Newby, originally just one field, and the clubs home until January 2009. To the enthusiastic members and board of Directors, Newby was, by no means, an ideal ground and all agreed that the club needed new premises to fulfil its potential.

To be fair, Scarborough RUFC had made the best of their Newby facilities. A clubhouse, converted from an old poultry house, 60 feet by 15 feet, which had been purchased from a member for £26, included changing accommodation and, of course, a bar.

But, after twenty years of trying to improve the facilities, the club was able to purchase land at Silver Royd, Scalby, North Yorkshire, build the J M Guthrie Clubhouse complex and construct nine new pitches. The £4.5 million required to develop the new site was raised through the sale of the Newby site, private fund raising and a government grant,

Approximately £450,000 was allocated to the playing surfaces and the club now has, arguably, one of the best amateur rugby facilities in the country.

But, nothing is without its complications, and the fight to achieve this position of excellence was a hard won battle of determination, in the face of serious opposition from sceptical members, and some of the worst weather conditions the chosen contractors, MJ Abbott, had faced in a very long time.

There were three significant weather events which impacted greatly on the progress of the project. Firstly, persistent and heavy rainfall occurred during the earthmoving stage. Secondly, during the worst excesses of winter weather, i.e. the wettest on record, then the coldest - with prolonged snowfall - followed by further rain, the pitches were unable to establish thenmselves naturally. Thirdly, causing even further disruption, a severe drought, at the end of the short playing season from January to May, took its toll on the newly formed pitches.

Graeme Young, the club's Chief Executive, was the dynamic force behind the project. His love for the club led him to volunteer to oversee the whole of the building and pitch construction in his spare time.

"Work on the construction of the playing fields was due to commence in the summer of 2007," he explained. "We were hit with severe planning delays, which were finally resolved, and things eventually got underway in January 2008. So, we had already lost a vital six month window of activity. You may recall that 2008 was the year when it rained ... and rained … and then rained some more! From the moment the contractors came on site it poured constantly and, what initially began as a twelve week project, literally took all summer."

The timescale for the entire project, from building the clubhouse to having the pitches in a playable condition, was actually fourteen months. "This schedule was calculated from the day we sold our current site to the anticipated day of vacating and moving into the new one," said Graeme. "It was a 'best case' scenario, with no contingency plans built in. Not because we didn't expect any problems, but because those dates were non-negotiable.

This, obviously, put us all under enormous pressure to have the pitches up and running in time for schedule matches. Needless to say, these unforseen events threw the schedules into complete disarray!"

MJ Abbott Project Manager, Nigel Wyatt, was pragmatic in his approach. "When faced with these sorts of conditions there is absolutely nothing you can do about it, except be patient. We were very fortunate that Graeme understood our position, and was as determined as we were to maintain the highest standard of build, despite the pressures from some quarters to try to implement short term fixes."

The first phase, and original installation, consisted of converting a greenfield site, that had been used for farmland, into eight hectares of top quality sports field. It required the entire surface area to be stripped of topsoil, followed by cut and fill earthworks of approximately 40,000m3, to create three plateaus. The first would be used for the stadium pitch and the other two for the training pitches, of which four were senior and four junior.

During the initial excavation period, groundstaff from MJ Abbott were available on site for six weeks waiting for a break in the weather to allow an opportunity to progress the excavations. Cut and fill was nigh on impossible during this time.

"It is in times of adversity when difficult decisions have to be made and stood by," said Graeme. "Nigel was adamant in his refusal to instigate excavation works when the conditions were atrocious and, for me, it highlighted the importance of engaging a reputable company that was strong enough to ride a period of non-activity and be on call." 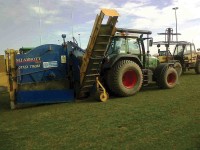 Despite the pressures, and demands, from many quarters, Nigel insisted that MJ Abbott would proceed immediately the right circumstances presented themselves and they would not let the club down. He was true to his word. Nigel refused to bow to adverse comments, but maintained a professional, considered view at all times.

A primary drainage system was installed throughout, including mains and lateral drains at five metre spacings on the stadium and first training pitch, with ten metre spacings to all other areas. Four hundred tonnes of sand was ameliorated into the topsoil on the stadium and first training pitches. Both of these areas had full floodlight systems installed to dramatically increase the available time for matches and training sessions.

The pitches were finally seeded in late October 2008, and it was agreed with all parties, including Agronomist Advisor Alan Lewis from Total Turf Solutions, that a certain amount of remedial work would be required further down the line. Despite this, the club acknowledged that it was inevitable that some matches would have to be played earlier in the season than was ideal. These matches did, indeed, go ahead and the pitches came in for some fairly major criticism from players. 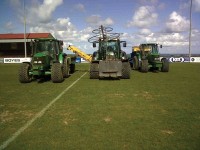 "We had to go with those scheduled games to meet our obligations" explained Graeme. "It was unfortunate, because the pitches hadn't had enough time to establish, but we survived and, once all the fixtures had been completed, MJ Abbott carried out the necessary remedial work for us during the closed season."

Corrective procedures included installing secondary drainage schemes, and instigating a programme of topdressing, overseeding and fertilising, as well as gravel and sand slitting and verti-draining. Additional sand banding and secondary drainage on the lower pitches will take place next year.

All of the patience and resolve, coupled with the dogged determination of Graeme, and the professionalism of Nigel Wyatt, has paid off. The pitches are now in peak condition and have been receiving praise since the beginning of the rugby season.

Groundsman, Adam Flinton, implements an in-house maintenance programme of mowing, sand slitting and regular use of a Sisis Quadraplay after each match, whilst contractors are brought in for seasonal topdressing and verti-draining. "The quality of our facilities, including the clubhouse, is of such a high standard now," said Graeme, "that we are looking forward to the possibility of hosting County and even National matches in the future."