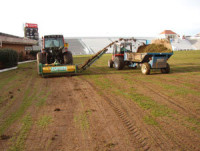 The club obtained an 80% ECB grant towards the £18,000 required to do the work, which started last September as soon as the 2004 season ended.

It was anticipated that the work would be completed in time for the 2005 season, but problems were such that Scarborough were forced to play their early Yorkshire League matches away from North Marine Road, and they did not play their first home until the last Saturday in June - two and a half months into the new season!

However, the club's priority was to make sure the ground was ready for Yorkshire's matches and, fortunately, it was in order for the first county match of the season against Leicestershire on July 20.

He added: "The original plan was to Koro off the turf and thatch layer prior to cultivation, grading and re-establishment of a new grass sward. However, there were concerns about the volume of material that would be generated because of the very thick and fibrous nature of the thatch layer. Incorporation of the organic matter into the soil was also considered to be helpful in terms of improving soil structure and nutrition. So, TurfTrax were asked by the ECB to provide and evaluate the proposals of the scheme and then supervise the works."

Alex Vickers from TurfTrax produced a report in August of 2004 that recommended the following strategy:

Seward Turf Maintenance were appointed to carry out the works.

The outfield was sprayed with Glyphosate in mid September and cultivated and graded in late September.Tim Colclough visited North Marine Road on September 29 to assess progress. Grading works were underway, but it was noted that there remained a high proportion of turf clods within the soil, therefore an additional stone burying operation was agreed in order to break up and bury the remaining clods and, simultaneously, produce a seedbed. The operation was completed and seeding took place the following day into a reported clean seedbed.

He visited Scarborough again on November 12 and it was noted that there remained a high percentage of turf clods at the surface, and it was assumed that rainfall after seeding had subsequently exposed the material at the surface. However, grass establishment was good and it was decided to review the situation in early spring in order to produce a strategy to remove the clods.

A meeting was held with the club, the ECB, the contractor and TurfTrax in early spring 2005. It was agreed that the outfield would be Fraise mown with the Koro to remove the remaining clods but leaving the crown of the grass plants to provide some re-growth. Additional over-seeding and top dressing would also be carried out to help restore a full cover and smooth out the surface.

The work was implemented with a fair degree of success and most of the remaining clods were removed. 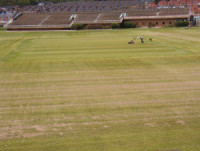 "The club were also advised to use a triple mower in order to increase the mowing frequency, to apply fertiliser to boost grass growth and to purchase additional sprinklers to improve irrigation application. These instructions were all implemented and have assisted the speed of recovery and development of the turf.

"The outfield has now developed very good density and uniformity with a blend of fine leaved perennial ryegrass dominating the sward, with a decent under canopy of fescue helping to provide density at the lower cutting height now employed.

"The outfield was passed as fit for play for the first Yorkshire League game on the June 25 and the first county game took place on the July 20."

Ian Powell, Cricket Development Officer for the Yorkshire Cricket Board, who administered the scheme on behalf of the ECB, attended the Leicestershire match on the last two days and said, " Reports say the work has gone well. We have got the job done, we have completed the first county match and we have now got a base to work from. The outfield is now level, the ball ran as true as you could expect it to run and, although there were one or two balls that bobbled, there was nothing dangerous. Because we haven't got a lush growth of grass it didn't allow the fielders to slide, but everyone was happy with it.

"We were highly delighted to get the county game on and we have learned a lot from the whole exercise to go forward from here. There is work to be done, but what the outfield really needs is water to help the grass to grow. Fortunately the next county game is not until the last week in August. After that match there will be a decision made as to what work the Scarborough club will want to carry out over the winter period.

"What the club have got is a base to work from. The outfield is level, but there is a little work to do in some areas but not a great deal of autumn renovation work other than normal maintenance. The problem we had was compaction. Now the outfield is draining very well so what we need now is plenty of moisture on it."

Photo 2: After over-seeding and top dressing in early May 2005.