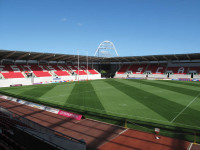 In recent years there has been a resurgence in Welsh rugby due, in no small measure, to three new state of the art stadia - the Liberty Stadium in Swansea, home to the Ospreys, the Cardiff Blues Cardiff City Stadium and Llanelli Scarlet's new ground, Parc y Scarlets. All three offer up-to-date facilities with modern, sand based, reinforced pitches, and all are managed by forward thinking groundsmen.

Welsh rugby has been 'regionalised' in recent years in an effort to mirror the success of the format in Ireland and South Africa. The Scarlets were founded in 2003, born out of four clubs - Llanelli, Carmarthen Quins, Llandovery and Narberth.

For a 'young' club, they have been fairly successful, having won the Celtic League once and reaching the latter stages of the Heineken and Powergen cups on a number of occasions.

Dean Gilasbey is the head groundsman at the Parc y Scarlets stadium. He began his career at the tender age of sixteen, working at The Vetch, the then home of Swansea City Football Club, before taking over as head groundsman at Stradey Park, the home of Llanelli RUFC, where he was to hone his skills on a soil based pitch.

In 2005, and after thirteen years service at Stradey Park, he was offered a position at Swansea's new Liberty Stadium and the opportunity to gain experience of working with, and understanding the techniques required of, a reinforced Desso pitch. Working alongside Head Groundsman, Dan Duffy, between them they trialed and perfected many new working practices to keep the Liberty pitch in peak condition.

This experience resulted in Dean being asked to work closely with the contractors providing the new pitch at Parc y Scarlets and, subsequently, the position of head groundsman. MJ Abbott were carrying out the main construction, which included 80mm piped drainage at five metre centres, undersoil heating and a fully automated Rainbird pop-up irrigation system. Inscapes then laid a 'new technology' Fibrelastic pitch from Mansfield Sand, 100mm of which was laid over 200mm of sand.

Work began on the pitch on 9th June 2008 and was completed in just over a month when, on 11th July, it was seeded with an MM60 perennial rye mix. Favourable temperatures ensured quick germination and, nine days later, Dean was completing his first cut with new John Deere pedestrian rotaries and, not long after, began regular cutting with his recently acquired Dennis G860 cylinder mowers.

Feeding the new turf was planned with military precision using a combination of granular and liquid feeds. Dean's aim was to get as much root depth as possible before the onset of winter and the club's first fixture in the November.

Having been involved throughout the construction of the pitch, he knows it better than anyone else. But, being just over a year old, extensive record keeping, a trait he picked up from Dan Duffy, is vital to understanding his pitch and how it is progressing.

Core samples are taken every two weeks to monitor root growth. For example, his records show that he managed to promote good root growth during the first four months (August-November) peaking at 122mm, before reducing to 40mm in January and February, and then steadily rising as the growing season began in spring 2009.

Dean is one of the new breed of groundsmen who combines the principles of groundsmanship with new technologies. Data collection to help make decisions is, he believes, very important.

He is assisted by Sion Bennett, who also previously worked at Stradey Park. Sion is a valued asset for Dean as they both look after the main stadium pitch and training pitch.

These new fibresand pitches are, technically, very challenging. Getting the feeding regimes right is all about monitoring grass health and physically checking on soil conditions on a regular basis.

Dean is currently monitoring nematode populations. Some areas of the pitch have seen damage when they are active and above threshold levels. He has been working closely with Dr Kate Entwistle (The Turf Disease Centre) and Dr Colin Fleming (The Agri-Food and Bioscience Institute) to ensure these populations are kept to a minimum and do not cause physical damage.

To help understand these little critters even more he recently purchased his own microscope, and also designed a funnel system to collect sample material, to keep an eye on their activity.

A programme of feeding the soil with biomass sugars has been undertaken to control the nematodes, with the Sisis Aeraid used to help dissipate the sugars through the soil profile. It appears to be working very well.

Like most stadia pitches airflow, shade and changing soil and air temperatures affect the performance of the sward at different times of the year. Whilst it is still early days, and continues to be a learning cycle for Dean and Sion, they are determined to keep the pitch performing and looking its best.

Dean saw the 122mm root depth achieved last year as more of a challenge rather than success, and was determined to beat that in the 2009 growing season. By understanding the feeding regimes, along with keeping moisture levels at an optimum to promote growth without encouraging any moss/algae attacks, the net result has seen root growth to 200mm. It's a fantastic achievement and one that, he believes, will aid recovery after wear and help the sward through the winter months.

Dean has enlisted the services of Jonathan Smith, of Geo Turf Consulting Ltd., to help carry out independent testing of the pitch and give advice when needed. Jonathan carries out a number of tests to help monitor pitch performance, including traction, hardness and water infiltration rates.

Aeration is a key maintenance task in these areas, but Dean has to ensure that he doesn't overdo it and make the pitch too soft. Tests are performed several times a year, using a 2.25kg clegg hammer, to monitor pitch hardness.

Tests carried out in October saw one hundred hardness values taken across the pitch, with the lowest being recorded at 77gravities and the highest at 100 gravities, resulting in an average of 88 gravities. The preferred range of values for rugby is between 65-100 gravities, so Dean is pleased with the results.

He has also recorded hardness values before and after using the Sisis Aeraid, with results showing a 14% reduction in pitch hardness. Proof, he concludes, that effective aeration reduces compaction. 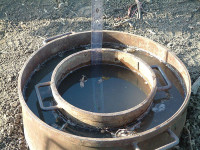 Match preparation is focussed on presentation, with the pitch being double cut using the G860s, usually the day before and on the morning of the match. The pitch is watered to maintain playability and stability, but weather conditions will dictate the use of the irrigation system. The pitch is overmarked using string lines.

Dean suggests where teams are able to warm up, keeping them off the shaded areas during the winter months. Good communication with both the home and away team managers usually ensures the pitch is protected from unnecessary wear and tear.

Dean has a good working relationship with his line managers, particularly Paul Sergeant, the club's Chief Executive who respects and understands the role of the groundsman at the club. Dean was recently asked to deliver a Powerpoint presentation to the players on the work required to maintain a modern stadium pitch. His presentation lasted thirty minutes and was well received. He says that, now they have a better understanding of his role at the club and the issues he faces, he hopes it will help him when it comes to how the pitch is used for training, warm-up etc. It is a proactive approach that is to be commended.

End of season renovations, Dean hopes, will include koroing off the pitch and overseeding, however, if this is not possible, he will invest in a tractor mounted scarifier and ensure he gets as much debris out of the pitch to enable some new seed material to be sown.

Dean and Sion are aware the pitch is still settling down and will continue to ask questions of their ability to manage it. That, Dean says, is what makes this job so fascinating and challenging, as you never know what it will throw at you next. And then there's the latest technologies to keep abreast of, one being lighting rigs, the benefits of which he fully understands. However, until the recession is over, and gate receipts improve, he does not see the club being able to provide these.

Everyone at Scarlets is settling in to their new home, and the pitch looks to be in very good hands.