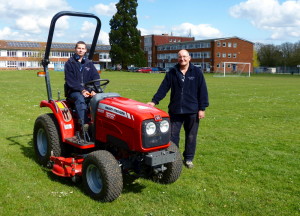 chool awards top marks to MF tractor A 25hp Massey Ferguson compact tractor with mid-mounted mower deck is helping Surrey comprehensive school, Broadwater, keep on top of its grounds and turf maintenance schedules following the school's decision to take back all such services from the County Council in 2009.

Classed as a state comprehensive with a dedicated special needs department, Broadwater School has occupied a 2.5 acre site on the outskirts of Godalming since
its foundation in 1966. Aged from 11 to 16 years old, the school's 460 students are expected to take part in daily indoor or outdoor exercise using a wide range of on-site sports facilities, all of which are maintained by the school's staff and machinery.

Facilities include a water-based synthetic hockey pitch, a sand-based synthetic soccer pitch, asphalt netball and tennis courts, two grass football pitches, a rugby grass practice square and a baseball diamond, laid out also on grass. During the summer,
the rugby and football pitches are used for cricket, athletics and other summer sports.

The decision to move grounds and sports turf maintenance services in-house followed the arrival at Broadwater School of Richard Williams, appointed site manager in 2009.
"I discovered that the school was paying £12,000 a year to the county council, primarily for mowing, line-marking and turf slitting," explained Richard. "Following discussions with the head teacher, we agreed that the money might perhaps be better spent by redefining the roles of the school's maintenance staff and doing the job ourselves using our own people and machinery."

Richard admits that the first tractor purchased by the school was not a success. "We erred on the side of caution and bought a low-cost imported model which coped but was not really up to the job," he said. "When a wheel bearing failed, we discovered that the importer was no longer supporting the tractor. Luckily, our local Massey Ferguson dealer, Sendmarsh Tractors, located 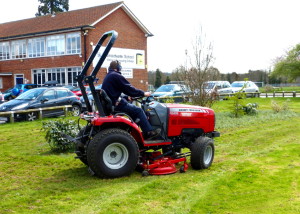 a suitable part and got the tractor back to work."

When the clutch failed in 2012, Sendmarsh loaned Richard a demonstration MF 1525H hydrostatic drive tractor with mid mower deck while attempting to source a new clutch.

"After a couple of days, the Massey tractor had become indispensable and we knew we had to have it," said Richard. "Fortunately, the school receives a good income from hiring-out its synthetic playing surfaces and we also had money in the kitty having taken grounds maintenance services in-house. Within two weeks, the MF loan tractor had become a full-time member of our machinery fleet."

Twelve months on, Richard says that the MF 1525H tractor is paying for itself. "Tasks that used to take a day or more are now completed in half the time," he explained. "Not only do we have total confidence in the tractor's reliability, but its performance, ease of use and manoeuvrability make it a pleasure to drive.

"My entire team likes using the tractor because it makes light of the work and is also very economical to run and maintain. Broadwater School cannot praise highly enough the tractor or the support provided by MF dealer, Sendmarsh Tractors."