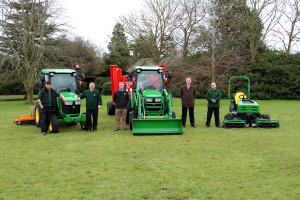 When Neil Yarham was appointed head of grounds at Langley School in Loddon, Norfolk, his brief was exactly that: to improve all the sports ground surfaces. It was a target that also enabled him to achieve another objective: to use John Deere equipment.

Langley School's grounds cover 110 acres, three-quarters of which are allocated to grass sports fields (there is also an astroturf pitch). The grass fields are used not only for a comprehensive range of sporting activities, including rugby, football, hockey and cricket, but also by local sports clubs. The school is very active in the area, as it works in partnership with Norwich City Football Club and also has affiliations with Leicester Tigers Rugby Union Club and Brooke Cricket Club.

"The sports grounds had suffered from minimal maintenance," says Neil. He explains that the improvement regime is structured around better agronomy, the introduction of a specific nutrition programme to improve the N, P and K indices in the heavy ground, and sports-specific grass cultivars capable of establishing a root system to cope with the site's clay soils. These elements are combined with more regular aeration, complemented by slitting.

"We were also let down by the machinery," says Neil. "Timeliness of operations suffered due to narrow implements being used on an ageing tractor fleet. We needed more power so we could put bigger equipment on the back of the tractors and get over the ground in a more efficient and effective way.

"I'd used other makes of tractor and seen venues where John Deere machinery was used, so I wanted to progress to the brand for its product reliability and customer support. We managed to get the right machinery package through working closely with our local John Deere dealer Ben Burgess in Norwich and, just as importantly, we were extremely impressed with the level of after-sales service they offered."

Delivered by Ben Burgess GroundsCare Equipment in February, the new fleet included three compact utility tractors: a 66hp 4066R fitted with a front loader and a 45hp 3045R, both equipped with cabs to provide driver protection on the school's exposed and windy site, plus a 26hp 1026R. Also included were a 2653B ride-on triplex cylinder mower and two ground-driven SISIS implements, a Quadraplay pitch care system and a Megaslit slitter.

Garden maintenance is more the 1026R's role, while the 4066R and 3045R are more sports-specific machines, although they are involved in every aspect of the school's overall grounds maintenance. "We knew we needed wider implements, which had a bearing on the choice of tractor models," says Neil

"The power of the 4066R and the 3045R in a compact body was a big attraction, plus their ease of operation. Although the tractors are dedicated to sports field work most of the time, there are occasions when they are used by the school's general maintenance team, so we were looking for machines that were not hard to drive. This is provided by features such as the eHydro transmission."

The 4066R is the main workhorse, while the 3045R covers mid-range operations. Neil describes their sports field role, with operators Toby Parker and Ian Goodall in the driving seats:

"The power of both tractors has allowed us to introduce the 2.4m wide Quadraplay system, which enables us to aerate, scarify, roll and brush the surface in one pass, and increase the width of the slitter from 1.8m to 2.5m. The intention is to carry out these operations on a weekly basis if possible. The 4066R's front loader also improves timeliness, as it enables us to carry out our own top dressing and winter pitch renovation."

There are also plans to upgrade the astroturf pitch to a 3G surface with its associated maintenance equipment, so the tractors' workload will increase. "They will be pushed hard," says Neil. This spring will also see the 2653B utility ride-on cylinder mower out on the sports fields for the first time.

"This is our first John Deere triplex and will be used on all the fine-cut areas, as it gives a better finish due to its greater number of blades per cylinder," says Neil. "It is also very nimble, so it can get into areas other ride-on cylinder mowers can't, and it is light, so we'll be able to cut in conditions we weren't able to before.

"Teaming up with Ben Burgess and John Deere has given us the machines with the reliability and the back-up we need, which will enable us to achieve the goals we've been set."