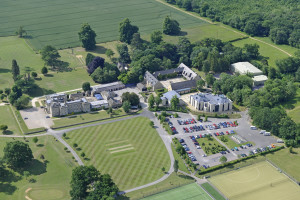 An Oxfordshire independent school which boasts a wide range of sporting facilities, including its own nine hole par three golf course, keeps life busy for its grounds staff.

Head groundsman Simon Hole and his team of three certainly rise to meet the challenge at Cokethorpe School, which is set in a parkland estate of nearly 150 acres in Witney.

Simon used mixtures from Germinal Seeds, formerly British Seed Houses, for the first time and is delighted with the results. He said: "Our pitches have never looked as good as they do now. We are putting more focus on renovation and good practice and choosing the appropriate seed plays an important part in that."

Advised by technical sales representative Sandy Pentecost, Simon used A30 Rapid Sports Renovator Plus on the school's seven rugby pitches. This mixture is recommended for those looking for a high performance, hard wearing winter pitch. It is cost effective and offers good recovery.

The school gives more than 200 boys the opportunity to represent Cokethorpe across a total of 12 rugby teams and a number have gone on to win representative honours at area, county and national level.

When the school hosted an England Under 16s rugby training camp in March, Simon and his team received positive comments about the high standard of the pitches.

Cricket is also popular at Cokethorpe. Simon used Germinal Seeds' A5 mix for its three cricket squares as the perennial ryegrass mixture is quick to establish, hard wearing and provides high density cover.

A local cricket club uses the pitch too and plays there until the end of August. Germinal Seeds was also the seed supplier of choice for Cokethorpe's golf course where Simon used A28 Superfine Ryegolf on the golf greens.

This versatile mixture is another hard wearing option. Simon has worked at Cokethorpe for four years, the last three as head groundsman. He added: "When I started the pitches had not had a lot of work done to them over the years. We have worked hard to make improvements, particularly with aeration, 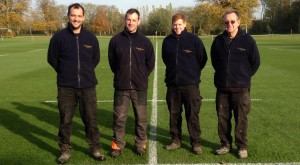 and we are seeing the results.

We have a full schedule because of the number of sports and the range of facilities provided. Working here is enjoyable and rewarding."
Hockey, football, tennis, athletics, rounders and volleyball are among the many sports on offer for the 660 boys and girls aged four to 18 who attend the school.

Sandy Pentecost said: "It is really satisfying to see so many of our Grade 'A' sports mixtures having a positive effect on the various surfaces being managed by Simon and his team."