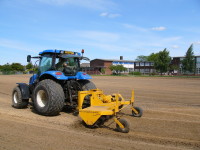 Children from seven schools in Hull can look forward to a full programme of winter sports next term following an extensive, government funded scheme to upgrade and drain their sports fields.

"Following the floods of 2007, a big chunk of money was made available for flood proofing buildings and schools and school sports pitches were part of this," explains Peter Chilton, Senior Landscape Architect at NPS Humber Ltd., the company responsible for the landscape design, tendering and administration on behalf of Hull City Council.

"The whole of the city centre is not much above sea level, about 2 metres at the most and it's mainly built on clay which means that there's a high water table. The scheme has involved the addition of a lot of sand into the root zone and the installation of attenuation tanks that can store excess water and gradually release it into the sewer system, ponds or dykes," he continues. "Most of this water flow is controlled by pumps ensuring that it moves at a very constant and slow rate to prevent flooding problems downstream."

J Pugh-Lewis Ltd was awarded the contract for work on two primary schools, Ainthorpe and Bricknell, starting in March and finishing in Whit Week at the end of May. 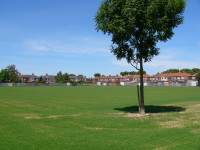 "At both these sites we've installed intensive pipe drain systems with lateral drains laid at 2.5m centres," says James Pugh-Lewis. "The systems also incorporate attenuation tanks to regulate the outflow into the sewers, with capacities of 160 cubic metres (35000 gallons) and 140 cubic metres (31000 gallons) for Ainthorpe and Bricknell respectively."

The existing pitches contained severe undulations, but because the whole area is so low lying, re-grading was not straightforward. "One of the challenges was making sure that we could produce flat pitches that would still shed surface water," James continues. "At Ainthorpe the surrounding area is higher than the pitch and so we introduced a crown. For Bricknell we were able to introduce a fall from one end to the other, though at 1 in 400 it is only a slight one. The playing surface has also received a heavy sand amelioration, which will help surface drainage enormously."

Both operations had to be carefully project managed. "At each school we started by excavating borrow pits sufficiently large to accommodate the attenuation tanks as well as all the spoil that would be generated later on by the drainage operations," James explains. "The soil from these pits was then used to correct the surface levels on the pitch, which we needed to do before installing the pipe drains. It took a bit of working out, but it has meant that no spoil has had to be taken off site and we aren't left with any unsightly mounds."

By the end of May both pitches had been seeded and Peter Chilton was confident that Hull, however low lying or clay based would be able to withstand any downpour thrown at it. "The sports field renovation scheme is designed for a 1 in 30 event," he said "and that's a lot of water."