by External source
in Conservation & Ecology
on 05 Jan 2013 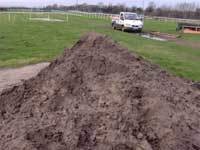 Soil scientists in Germany have made a breakthrough in their understanding of how healthy soil is formed. They found that the remains of dead bacteria, which build up in fertile soils, play a much greater role in soil health than had previously been assumed.

Researchers from the Helmholtz Centre for Environmental Research (UFZ) in Liepzig, conducted laboratory and field testing to demonstrate that healthy soil is created when plant material is converted into microbes, which then die and form the source material for soils.

The discovery, which comes less than a month after World Soil Day attempted to raise the profile of this most important resource, opens a new avenue of research for soil scientists; before the UFZ researchers and their international colleagues, began their research, it was assumed that soil was mostly comprised of decomposed plant matter, and less focus was placed on bacteria and fungi. http://www.farming.co.uk/news/article/7638

They said their research has implications for climate change research, as well as agrology because soils are the largest land-based carbon sink on Earth. The researchers said "Climatic change can therefore be slowed down or accelerated, according to the management of the soil resource."

Miniscule parts of dead bacteria were found throughout soils examined by the UFZ researchers; they said these had been discovered in previous studies, but not fully understood or investigated. Their findings relating to the bacterial matter in soils led them to understand some important factors of soil degradation and regeneration.

See the rest of thisarticle on the following link :-Farming.co.uk