Scientists have made a new discovery about the way bees feed, prompting new concerns about the use of specific types of pesticides 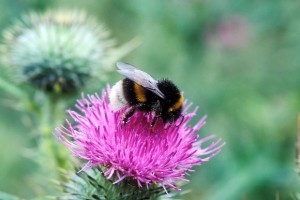 Researchers from Stirling University believe that bees, which buzz against flowers to collect pollen on their legs, may actually reduce their speed when feeding.

This allows them to conserve energy by getting the maximum food for minimum effort.

Authors of the study, which will be published in the Journal of Insect Behaviour, said: "Our research suggests that bumblebees learn to adjust down the frequency of the vibration used during pollen extraction... We speculate that by learning to lower the frequency of the feeding buzzes, bees can save energy, while collecting the same amount of pollen."

The discovery that how the insects feed is more complex than previously thought has added to concerns about the impact of controversial pesticides.

The authors of the study warned that falling bee populations could be linked to neonicotinoids interfering with neurotoxic chemicals involved in feeding.

Penelope Whitehorn, co-author of the study said: "Because neonicotinoids are neurotoxins and bees' feeding is very complex, involving lots of different neurological mechanisms, I think it will undoubtedly be affected in some way by exposure to these pesticides."

The authors plan further research into the impact of the pesticides on laboratory bees.

Scotland currently has restrictions placed on neonicotinoid pesticides, which bans their use on crops which bees feed on, but not those that they do not feed on directly.

The Scottish Wildlife Trust told the Sunday Post said that "more and more evidence" was emerging to show the chemicals are harmful bees.

The National Farmers Union of Scotland and the Scottish Government both said there was still not enough proof to warrant and all out ban.

For the original article, visit www.heraldscotland.com.