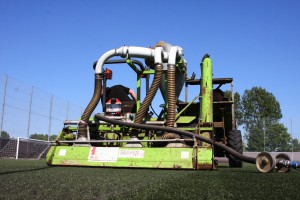 The Facility at SCORE by Leyton Orient have renewed their service agreement with artificial sports maintenance specialists Replay Maintenance for a further five years - building on the already successful partnership the two companies have enjoyed for the last three years.

SCORE opened in 2005 after six years of planning and funding and currently provides a range of activities, services and facilities for the local community, with over 2000 using SCORE on a weekly basis. SCORE has been pioneered and managed by Leyton Orient Community Sports Programme, The Trust of Leyton Orient Football Club.

The pitch forms the centre piece at SCORE and is used by a range of local clubs, social teams, schools, colleges and Leyton Orient's Academy.

As Neil Brown, SCORE Operations Manager explains: "The artificial sports pitches are used around the clock 7 days-a-week. We used to have continuous problems with the pitches flooding during heavy periods of rain. McArdle, who installed the surface, recommended we brought in Replay Maintenance to help solve our issues."

Following a site visit by the experienced technical team at Replay back in 2010, a three year Replay Revive® service agreement was recommended with a Replay Rejuvenation® scheduled for late 2013 - ensuring that the pitch was always kept in the best possible condition and that flooding of the pitches would soon be a thing of the past.

The patented Replay Rejuvenation® process can restore compacted and contaminated artificial football, rugby, hockey and tennis surfaces to an 'as new' performance and appearance using compressed air to remove the contaminated top layer of infill and restore the pile to a vertical position. New clean infill is then added. The process can often double the playing life of a pitch or tennis court for less than a quarter of the cost of installing a new carpet. And, unlike replacing a pitch, the Replay Rejuvenation® can be completed in days - saving time and minimising loss of revenue to any facility.

"Prior to Replay, we had continuous problems with the pitch flooding. The maintenance that we have received over the last three years has greatly reduced the flooding. Since the Replay Rejuvenation, and even during the recent torrential rain, the pitches have performed remarkably well - I don't think any other 3G pitches were playable in the area - which is testament to the on-going maintenance work carried out by Replay."

"As a charity, ensuring that the facility is always available for use and fit for purpose enables us to meet our community targets. We had just completed a three-year service agreement, and because the pitches had been consistently performing over that period, we had no hesitation in signing a longer five-year agreement with Replay Maintenance. It makes budgeting easier having a fixed price for five years and we know that we won't have any issues with the facility in that time. I've been impressed with Replay's level of technical expertise and would recommend them to any other facility."