Gardening Scotland has another successful year Gardening Scotland, Scotland's Gardening Festival, was once again a mecca for gardeners, foodies, families, and outdoor living enthusiasts when it took place at Ingliston near Edinburgh at the weekend.

Almost 33,000 visitors were wowed by floral displays, show gardens, and a tented village of shopping stands, plant stalls, and the best of Scottish food and drink.

The Caley Floral Hall was yet again one of the highlights of the event, packed with innovative and colourful displays.
Martin Dare, Show Organiser, said: "We were once again delighted with the quality of the exhibits in our Floral Hall at Gardening Scotland.

This is a huge draw for visitors to our event, and also has a hotly contested competitive element to it. We would like to thank all of our exhibitors in the Caley Floral Hall and throughout Gardening Scotland, for the efforts they make to put on an outstanding show for the paying public, and our sponsors, without whom Gardening Scotland would not be the success that it is."

A host of awards were presented across the various competitive classes in time for the public opening of Gardening Scotland on Friday. Awards included the Best Floral Exhibit, won by Dibleys Nurseries; Best Show Garden which was awarded to Dougal Phillip's New Hopetoun Gardens; The Best New Plant award was presented to Streptocarpus 'Polka-Dot Purple'; The Alf Evans Award for Best Commercial Alpine Exhibit was won by Kevock Garden Plants; and the award for Best Floral Art Display went to Edinburgh Floral Art Club. 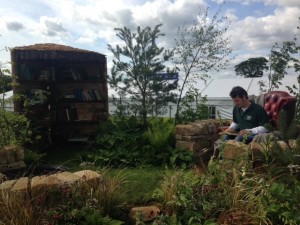 Last but by no means least, the Dundee and Angus College Japanese Garden was awarded the I Dig It People's Choice Award, sponsored by Linlithgow DIY, and Jon Wheatley and Keith Jackson took home the Sunday Post People's Choice Award for their Mexican inspired dahlia garden, which also won Gold at Chelsea Flower Show this year.

Martin continued: "We had great weather to welcome the start of the show on Friday, Saturday was lovely, and Sunday was far brighter than the forecast had suggested. All-in-all we were delighted with Gardening Scotland 2015 and look forward to growing on the success for future years. See you in 2016!"

To learn more about the event, visit the website here.