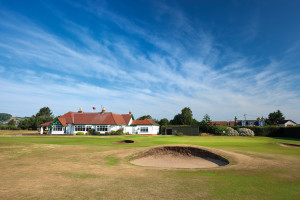 One of Scotland's oldest golf clubs has undertaken an unprecedented project to return its famous layout to the original specifications in time for its 200th anniversary. Scotscraig Golf Club, which was founded in 1817, is the world's 13th oldest golf club and boasts an 18-hole championship course originally laid out by James Braid.

The ambitious restoration programme will see all of the course's green-side and fairway bunkers returned to their original size with many being substantially expanded. With additional on-course alterations being completed in tandem with extensive gorse removal, this is the biggest such project undertaken by the club which is situated in between St Andrews and Carnoustie.

"The amount of work carried out in the last 15 months has been substantial," noted George Anderson, Scotscraig's vice captain. "The conclusion of the current programme will be later this year when all the remaining fairway bunkers will be returned to their original dimensions. We're bringing Scotscraig back to what it used to be - we're re-establishing the course."

The first phase of the project involved rebuilding 21 green-side bunkers and a comprehensive redesign, rebuild and expansion of the fourth green and its associated sand trap which are both now open for play. Stage two will see 26 fairway and approach bunkers rebuilt in time for the club's double centenary celebrations next year. The far-reaching restoration project is, as a consequence, as much to do with reviving James Braid's ingenious design as it is about future-proofing a much-loved course and one of Scotland's true hidden gems.

"Although the work is extensive, we are also mindful of the club's history and what the course looked like in years gone by," said Anderson. "At the same time, we are undertaking a modern development to maintain the challenge of the layout. Scotscraig is a championship course with an extraordinary history and an exciting future. These changes are designed to celebrate the past and prepare the club for what lies ahead."

At the centre of these comprehensive alterations is Chris Barnard; Scotscraig's talented course manager who took up the post in March 2015 after completing stints at Kingsbarns Golf Links, Paraparaumu Beach Golf Club (New Zealand) and Royal Cinque Ports. Returning to his native Fife, Barnard acknowledged his homecoming had a lot to do with the quality of Scotscraig's celebrated layout and the opportunity to reawaken one of Scotland's most cherished courses.

"It was exciting to be back in Fife and especially to such a prestigious club where there are so many possibilities," said Barnard. "The objective was to move Scotscraig forward, so this year we've concentrated on reinstating all the green-side bunkers in advance of the bicentenary year, and then we'll move on to the fairway bunkers. These are big changes and the members are desperate to get on and play them."

As well as the new-look bunkers, Scotscraig's fairways have also been cut so longer hitters will find narrower landing areas the closer they get to the green. With more fescue grasses also being assimilated into the putting surfaces, the changes at Scotscraig are being introduced from the ground up. Barnard continued: "We're trying to mould the course into something that is playable for both members and visitors and is fair, yet is still a good test for tournaments and low handicappers."

The on-course changes and the club's new course manager aren't the only introductions being made at Scotscraig. The club has also completed a far-reaching investment programme which has seen its fleet of greenkeeping machinery replenished with new John Deere kit, supplied and supported by local dealer The Double A Trading Company of Cupar, Fife. 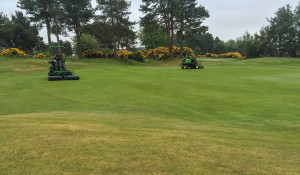 The £300,000 investment made over the last two years has resulted in two new fairway mowers, two ride-on greens and tees mowers, a rough mower, a compact tractor with loader, an aerator and a Gator utility vehicle. "We're almost completely John Deere now," noted Barnard, "and we're much more efficient because of it. With the two new fairway mowers, for example, we can do all the fairways in less than a day, whereas before it would take us a day and a half to finish the job."

With the same cutting units bringing flexibility and improved standards of presentation to the club, Scotscraig is benefitting from its move towards a single machinery supplier. "John Deere and our dealer Double A Trading are proud to support the redevelopment of Scotscraig's historic course, and the work being done by Chris Barnard and his team," said John Deere's turf division sales manager Chris Meacock.

He continued: "We are also proud of our history and heritage in golf - for more than 80 years, we have supplied golf courses with equipment from our original tractor-mounted reel mowers to the pioneering E-Cut hybrid electric greens and fairway mowers of today, two examples of which have been acquired by Scotscraig in this latest fleet deal. We look forward to continuing our strong business partnership with the club and to being part of this exciting bicentenary project."

Scotscraig Golf Club is currently in the design phase of its next 10-year development plan which will include further considered changes to the respected championship course. In the meantime, the club is preparing for a year of bicentennial festivities in 2017.

We wanted to find out more about the celebrations and development progress, and you can view a full in-depth article in the August/September magazine.