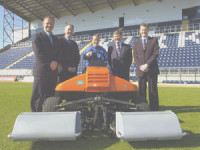 Falkirk Football Club, who recently won promotion to the Bank of Scotland Premier League, has tied up a five-year, £200,000 equipment and servicing deal with Fairways GM, Scotland's premier groundscare company.

This means that head groundsman Jim Dawson now has top-of-the-range mowing and turf maintenance equipment, which drastically reduces the time it takes to prepare Falkirk's Community Stadium pitch and training facilities at Little Kerse, by two-thirds.

"The new equipment deal with Fairways is fantastic and it will make cutting around 32 acres of grass a lot, lot quicker," he said.

Fairways managing director David Rae added: "It's a big year for Falkirk and we're delighted to get on board with the club. Jim now has the best possible equipment available to him. We consider ourselves to be Scotland's premier groundscare company, so now we're all in the same league."

It's been a busy time for Jim, who has been at the club for 11 years, as he has recently been nominated for the Scottish First Division Groundsman of the Year award by The Institute of Groundsmanship.

"I'm absolutely delighted to be nominated for this award. I'm up against St Mirren and the winner will be going forward for the national award," he said.

Falkirk's managing director George Craig said that Jim's nomination is "just reward" for the entire grounds team, which has produced one of the best playing surfaces around.

"Jim's worked tirelessly over the years and has been a great servant to Falkirk Football Club," he said. "His nomination came at the same time that Fairways became involved with the club and we're delighted to showcase their products on this wonderful surface. I'm sure it will get even better now."