Golf course presentation is quite a personal thing. Thick stripes, thin stripes, diamonds, blocks, geometric patterns - everyone prepares their surface in their own way but with one universal aim; when tournament day arrives, the grass looks the very best it can.

So what about colour? All grass varieties are rated for 'visual merit', among other desirable characteristics, but just how important is the shade of green in the preparation of sports surfaces?

When Scotts launched its brand new seed range at Harrogate Week in January, they brought a new element to the mix when it comes to selecting grasses - ryegrasses bred the American way. We're all aware of the so-called 'Augusta Syndrome' - members bemoaning the state of their own course after the Masters tournament, having been dazzled by the startling emerald surfaces tackled by golf's elite. The rich, dark green colour of grass varieties is undoubtedly what the market demands in the States and also in Mediterranean countries, while northern Europe has traditionally opted for lighter varieties. 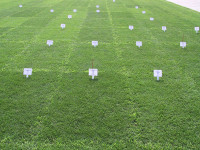 Scotts Professional has over 90 hectares of turfgrass trials at four research centres around the world, located in different climatic zones allowing both warm and cool season grasses to be tested, screened and evaluated. They cooperate with Pure-Seed Testing Inc., a pioneer in turfgrass breeding and one of the most productive and respective breeding companies in the world. Crystal Fricker is the company's President and Director of Research. She explains why breeding of darker grasses has been so popular: "When we started improving turf grasses in the US, we started with forage types which were yellow or light green and tall, aggressive growing types. To make advancements we selected the lower growing darker types. Also when the National Turfgrass Evaluation Progamme (NTEP) started in the US in the early 80's, colour was rated like turf quality on a scale of 1-9 with 9 being best and darkest, so everyone strived for the darkest thickest lower growing types."

"In terms of future developments, we're looking for varieties that have performance traits such as drought tolerance, salt tolerance and better disease resistance so colour is not the primary factor," she continues. "Even so, most of the American germplasm is now so dark that I think there will still be a prevailing darker colour in the US compared to Europe." 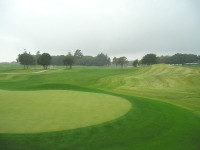 So, could darker grasses catch on here? Scotts' Nick Martin certainly thinks so: "There's definitely a place for them. Aesthetics are important and definition and contrast are all key considerations for match preparation, particularly at premium golf venues and sports stadia. Turf managers would all like to have rich colour without huge inputs and these grasses make that possible. Darker ryegrasses have been used with stunning effect at Irish golf courses on tees, fairways and green surrounds and they're particularly popular with parkland courses where darker fairways are often preferred."

One such venue is the Castlemartyr Resort in East Cork, an 18-hole, Championship, inland links-style course set into a 220 acre wooded estate. The challenging Par 72, designed by international golf architect Ron Kirby, has been under the stewardship of Course Superintendent Trevor Norris since it was grown-in back in 2006. The course was sown with a number of Scotts' grasses - Penn A4 and G6 creeping bentgrass on the greens, Roadrunner and Brightstar SLT in the ryegrass mixture on the collars and fairways, Seabreeze and Florentine (now Florensate) creeping red fescues on the tee tops and surrounds and Aurora Gold hard fescue on the mounds, all supplied by Irish distributor Goldcrop.

Trevor explained how the grass selection has helped create the links-style vision at an inland location: "Fescues have a naturally lighter colour and go into a natural dormancy during the colder months, so the use of darker ryegrasses on the fairways means that, even in winter when little fertilizer is applied, we have superb definition. They give us a hardier, thicker sward that presents the ball to the golfer superbly. We overseed with 100% ryegrass around the greens at a very high rate. Not only does it complement the lighter grasses on the greens, pronouncing the shape and contour, but the dense, healthy sward helps prevent Poa infestation on the putting surface."

"In real contrast, the tall, wispy dune-effect mounds were sown with Aurora Gold tall fescue which is maintained at knee-height and harvested once a year, giving a fantastic colour/texture contrast from June to October. It's low maintenance and has created the perfect habitat for our increasing hare population."

He explained how he selects the right seed for his situation: "Superintendents in Ireland take their lead from the States where all the grasses are darker. I look at the American NTEP data on cool season grasses and I'm happy to make my choice on that basis." 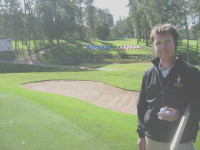 Agronomist Julian Mooney of Turfgrass Consultancy Ltd. drew up the seed specification for Castlemartyr. "Working closely with the architect, we selected the grasses for function rather than colour in this situation. The height of cut on the ryegrass green surrounds would have made the greens stand out but the darker grasses gave us greater intensity and contrast. The darker grasses are not preferred on all courses, however they can be very effective in a traditional parkland setting. When golfers visit courses in Ireland from overseas and the US in particular, they don't necessarily want the courses to look the same as in the US but they expect them to play the same. I feel the grassing plan and more importantly the management of the turf at Castlemartyr does just that, presenting extra definition and impact."

He also offers some sound advice on their maintenance: "Superintendents must not assume that because these grasses have a rich colour, they don't need feeding. In order to get the very best from the colour and texture and to minimise the risk of disease, they must have a well balanced fertilizer programme in place."

For more information about the full range of grasses from Scotts Professional Seed, visit www.scottsproseed.co.uk.