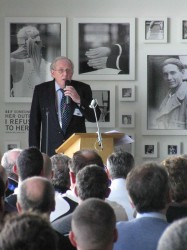 One hundred and forty grounds and golf course managers gathered at The All England Lawn Tennis & Croquet Club in Wimbledon recently for a seminar at which prominent speakers addressed the challenges of preparing turf for major events.

It was hosted by leading fertilizer manufacturer, Scotts Professional.

Scotts' Technical Area Sales Manager for the South East of England, John Noyce, welcomed those who had travelled from sporting venues across the UK, before introducing Head Groundsman, Eddie Seaward MBE, who opened the day's programme with an insight into the logistical challenges he and his team face in preparation for an intensive summer of sport in 2012, which will see the world's tennis stars battle for supremacy twice in a matter of weeks. The double showdown will begin in June with the eagerly anticipated Championship fortnight. The courts will then be brought back into action at the end of July for a week of Olympic tennis.

Scotts' Technical Consultant, Simon Barnaby, then took to the floor to discuss the development of Primo Maxx strategies for tournament turf. The plant growth regulator, manufactured by Syngenta and supplied by Scotts Professional, inhibits vertical growth, diverting growth downward into the root system to produce increased food reserves and lateral stem development. The result is a thicker, healthier sward that better equips turf to withstand extreme temperatures, moisture loss and wear and tear, and helps in the management of Poa annua. Its use has become an intrinsic part of turf management at sporting venues and he outlined some of the trial work that Scotts has carried out at golf and football clubs to establish how it can be used to produce optimum results.

After lunch, Dr Ruth Mann, Head of Turfgrass Protection at the STRI and her colleague John Lockyer, described some of the work the team at the institute has carried out at stadia in the Ukraine, Monaco and South Africa. The focus then switched to golf, as Director of Greenkeeping at St Andrews Links, Gordon Moir, rose to outline his team's preparations for this summer's 150th anniversary Open Championship staged on the Old Course.

Completing the speaker programme was Ipswich Town's Head Groundsman, Alan Ferguson, whose presentation described the steps he took to prepare the football club's playing surface for the heavy plant, staging and 25,000 music fans that descended on Portman Road for Pink's concert in June.

A visit to the world's most famous tennis venue wouldn't be complete without a tour of the courts. Eddie Seaward and his staff gave everyone the opportunity to see some of the construction work taking place in preparation for the Olympics. As the daylight faded, guests gathered under the closed roof of Centre Court to conclude the event with a Question & Answer Forum, led by Scotts' Michael Fance.

Summing up afterwards, John Noyce explained why such events were important: "Scotts products are used at major venues across the world and our technical staff work side by side with turf managers to assist them in producing and maintaining healthy turf in challenging conditions. By working together in that partnership and by sharing information and experiences, we can all continue to improve the quality of turf for sport and leisure."

Image 2: Speakers take part in a Question & Answer session under the closed roof in Centre Court.