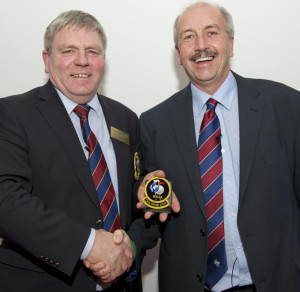 Les Howkins MG, Course Manager at The Richmond Golf Club, was named Vice Chairman. At the AGM Past Chairman Tony Smith, who has served the Association with distinction during his 18 months in the post, was nominated for Life Membership of the Association, a nomination that was passed unanimously.

Chris said: "I'm honoured to take on this role and I will endeavour to continue to promote the Association's goal of raising the profile and professionalism of greenkeeping.

"It has been a privilege to work with Tony who has carried out his role with skill, dedication and good humour. I would also like to express my personal thanks to Chippenham Golf Club for their support during my many years of involvement at Section, Region and National level.

"In my view, one of the Association's most important functions is the opportunity it gives all of our members to share and develop experience and knowledge at all levels. BIGGA is going from strength to strength. Evidence of this was clearly seen at the very successful BTME 2014. "

Tony said: "There's been some very good moments during my time as chairman, I've met some great people and travelled to some fantastic places I would probably never have visited."

He went on to thank companies who have supported the Association during his chairmanship, the National Board of Management and the team at BIGGA House.

He concluded: "Last but not least is a big thank you to all the membership for having the confidence in me and giving me the wonderful opportunity to serve you as your chairman over the last 18 months.

"When I started greenkeeping all those years ago I would never have thought that I would serve the membership as chairman, so there must be a message to you all out there. If you feel you'd like to serve on the board of directors or even chair it, get involved in your sections and regional committees and help to promote the Association.

"Now I wish my successor Chris Sealey all the very best for his term of office. I know he is very passionate about the Association and will take this great Association forward."

Chris and Tony then completed the ceremonial badge swap before Tony was presented with a commemorative plaque to mark his outstanding work as Chairman. Chris then officially welcomed Les Howkins MG, Course Manager at The Richmond Golf Club, as the Association's Vice Chairman.

Les said: "I'm delighted to accept the invitation to become Vice Chairman and am looking forward to having an extremely positive impact on the Association.

"I've been involved in the greenkeeping industry for about 25 years now so I've got an in-depth knowledge of it, and I'm keen to bring my enthusiasm and professionalism to the role.

"I'm a passionate supporter of the industry and have been a BIGGA member for many years, and I'm fully supportive of the strides forward the Association is making, particularly in education."

BIGGA CEO Jim Croxton said: "During Tony's 18 months as Chairman he has overseen a crucial period for BIGGA and done so with commitment, passion, energy and good humour. It has been a privilege to work with and for him.

"I now look forward immensely to working together with Chris who has been a hugely committed and knowledgeable member of the National Board of Management for some time."

For an extensive review of an eventful BTME 2014 keep an eye out for February's edition of Greenkeeper International.