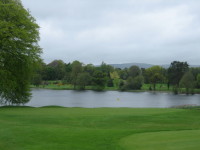 In addition to the company's ongoing work at Royal Portrush, irrigation teams are currently on site at Malone Golf Club some five miles from Belfast where they've installed a 9-hole Toro system with GDV control panel to the Drumbridge Course.

The new system, designed in-house by Nathan George, has been installed alongside the existing pump station and water storage tank to supply the tees, approaches and fairways on the front nine parkland course.

Course Manager Mike Norman visited Royal Portrush to inspect the work taking place there and spoke at length to his counterpart about the project:

"Joe Findlay at Royal Portrush was very complimentary about the work carried out by MJ Abbott, indeed all their references were exemplary,"
he explained. "Our greens system was dated so new valve boxes have been installed to upgrade it. We have dry spots all around this particular course and have used a manual system to irrigate which is not only labour intensive, but it has to be done when golfers are on the course which is far from ideal.

The new fully-automated system puts the control at our fingertips, enabling us to irrigate the course when and where it needs it, including in the evenings when the greenkeeping staff are off-site."