by Louise Prettyman
in Industry News
on 11 Dec 2014 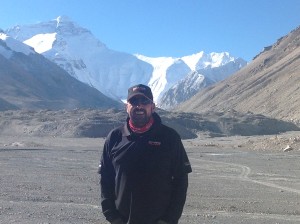 Orange Plants' Operations Manager Andrew Taylor certainly isn't scared of a challenge or two, recently returning from a 13 day trek to the North Base Camp of Mount Everest. In fact, this isn't the first time Andrew ('Pav' to his mates) has visited the Earth's largest mountain, having previously trekked to Everest's South Base Camp.

Prior to joining Orange Plant, Pav spent 24 years in the military, most recently as part of the Royal Army Medical Corp involved with transporting supplies and assisting in the functioning of mobile operating theatres. During his last deployment in Afghanistan he sustained injuries to his spine and hearing resulting in him being formally discharged in February 2013. The year before he was injured Pav and friend John Watson successfully climbed the Southeast ridge, reaching Everest's South Base Camp in Nepal.

An opportunity arose for Pav to take up the challenge once again, this time trekking the Northeast ridge to arrive at North Base Camp in Tibet; a mere 16,900 feet! "It was an opportunity I couldn't ignore", said Pav, "something I wanted to do post injury. It was a real personal achievement." After travelling to the mountain by 4 wheel drive and acclimatising in Lhasa for 3 days the trek commenced, completing the mission and reaching North Base Camp on 1st October.

He was accompanied once again by John and Philip Gillespie, an amputee who Pav met whilst in Afghanistan and again when they completed the Dakar Rally during the Race2Recovery.