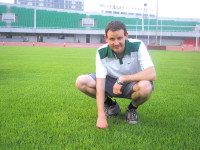 Understanding the Role of Secondary Elements and Micronutrients in Sportsturf Management

The secondary elements include magnesium, sulphur and calcium.

Magnesium is critical for photosynthesis because each chlorophyll molecule, which makes grass green, has a single atom of Mg at its core. It also plays a role in energy transfer, nutrient uptake and transfer. Magnesium is a cation and exists in the soil as a positively charged element, Mg+. The higher the cation exchange capacity (CEC) of the soil, the less likely it is that a Mg deficiency will occur.

Magnesium availability in the soil is governed by two factors, the amount in the soil and the proportion compared to calcium and potassium. Heavy applications of either calcium or potassium can increase the leaching of Mg by displacing it from cation exchange sites so that the amount in the root zone is reduced. Magnesium is second to calcium as the most abundant nutrient absorbed on exchange sites. It is susceptible to leaching in sandy soils, however, losses are not as rapid as calcium.

Turf established on sandy rootzones (such as is often used on golf course greens) is likely to develop Mg deficiency symptoms. Magnesium deficiency symptoms include general chlorosis, leading to interveinal chlorosis, which may be followed by blotchy red margins and necrosis. The sources of magnesium most commonly used on golf courses are Kieserite (MgS04.H20) and Epsom salts (MgS04.7H20), which contain 16% and 10% magnesium respectively.

Calcium plays an important role in wall formation, cell division and growth and is a component or cofactor in several enzymes. Calcium occurs in the soil as exchangeable ions (Ca2+), carbonates, silicates and as a constituent of organic matter. Because many calcium minerals are soluble, adequate moisture favours continual solubilisation and leaching.

Calcium ions also exert a strong influence on the absorption of other ions by the turfgrass plant. Calcium deficiencies are rare except in very sandy soils or where strong acidity has resulted from intensive leaching. The sand type used to construct or topdress greens will influence the need for calcium. Silica sands are chemically inert, and usually contain little if any calcium.

Calcareous sands may contain up to or more than 20% calcium carbonate (limestone), the limestone actually being a component of the sand-fraction. Calcium deficiency symptoms are usually a reddish-brown discolouration along leaf margins which develops to light red. Common sources of calcium include calcium carbonate (agricultural limestone) and gypsum.

Sulphur is a part of several plant vitamins and is a constituent of some amino acids required for protein synthesis. Most soil sulphur is contained within the organic fraction, and its availability to plants is a function of organic-matter decomposition.

Sulphur deficiencies in soils are rare, but responses to sulphur may be possible on sand-based greens, especially in areas of high precipitation. Young greens in particular may benefit from occasional applications of sulphur. As organic matter accumulates in the soil, however, the need for supplemental sulphur should become minimal. When used, sulphate-containing fertilisers usually supply adequate amounts of sulphur for turfgrass growth.Deficiency symptoms include yellowing older leaves, slowed growth and delayed maturity. An addition of sulphur to bentgrass greens has been reported to reduce the incidence of fusarium patch and black algae.

The seven micronutrients or trace elements required by turfgrasses are iron, manganese, zinc, copper, molybdenum, boron and chlorine. These microelements are needed only in minute amounts and rarely need to be supplied to turfgrasses growing in mineral soils. However, when turfgrasses are grown in high-sand-content soils or high-pH soils, micronutrient application may be beneficial and is often practised. The importance of micronutrients lies primarily in their role as catalysts in enzymatic reactions.

Iron is the micronutrient most often found to be deficient in turf. One of its primary functions in the plant is its involvement in the formation of chlorophyll. Iron is not a part of the chlorophyll molecule, but chlorophyll will not be formed if iron is not there in sufficient quantities. Iron deficiency in individual plants is characterised by an interveinal chlorosis of turfgrass leaves and the eventual thinning of the turf. Iron deficiency may occur because of excessive levels of zinc, copper or manganese.

Turfgrass colour is sometimes poorer when a boron deficiency occurs.

Copper is highly toxic to plants except when it occurs in very dilute soil concentrations. Copper functions as a component of several enzyme systems and in the synthesis of certain growth promoting substances. Zinc is essential to plants but only in minute quantities. Zinc plays important roles in enzyme activation, membrane function and auxin stability. Of all the mineral nutrients known to be essential for plants, molybdenum is required in the least amount. Its primary function in plants is as a cofactor to the enzyme system involved in nitrate reduction.

About the author: Dr. Tim Butler is a Sportsturf Science Agronomist and Independent Expert on all aspects of Golf Course, Sports Pitch and Race Track construction, renovation, drainage, agronomy and environmental management.