"Even the toughest steel is no match for an angle grinder - the tool of choice for many criminals now - but, what you can do is minimise the risk"

It is often said that prevention is better than cure, so a little effort to reduce the risk of an attack on premises or sportsgrounds will save time, money and heartache in the long run.

So says Andrew Gregory, a Crime Prevention Design Advisor/Crime Reduction Officer for the police, who urges that, for specialist advice, a club's first port of call should be his local equivalent, who will be able to carry out a thorough survey of your site.

"First, remember that many crimes are opportunistic, so the thief will not necessarily have planned an attack but, because a simple opportunity has arisen (leaving grass-cutting equipment unattended on a sportsfield), they take it.

Clubs can conduct a simple survey themselves, he continues, yet rarely do people have any idea how a thief operates. They also have little knowledge about basic crime reduction measures.

As most thefts are opportunistic, try and look at your building or site "through a thief's eyes", he suggests.

Criminals try to pick premises that look unoccupied, have little or no obvious security and where they think they won't be seen or apprehended. "The technique that we employ in all security surveying, however large or small, is called the 'Onion-peeling principle', Gregory explains.

"Imagine peeling off the layers off an onion. The process simply means starting at the outside and working inwards to the 'risk target' (what the potential offender might want to damage or steal). In practice, this involves some preparation before visiting the sportsground or building."

Clubs then need to look at the environment - outside the perimeter or boundary - and work into the centre of the area that is to be protected (the interior). "This process applies to every type of building, from detached houses with gardens through to a bedsit in a shared house," he adds. "It also includes commercial buildings, sportsgrounds, garages, outbuildings and sheds."

Next, look at the perimeter or boundary, and the state of the walls, fencing or other barriers. "We examine the shell of the property including windows, walls, doors and accessible roofs and, finally, work in towards the interior of the building - its layout, design and the property stored inside. Always bear in mind that a target can be in any of the layers." 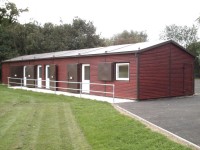 At each layer, the aim is to delay the offender and protect or, if possible, remove any potential targets, make it more difficult for the potential offender to attack the property and give the maximum amount of surveillance.

"Your local crime prevention design advisor (CPDA) or crime reduction officer (CRO) can give advice on CCTV and alarm systems, but most crimes can be prevented by some simple housekeeping procedures," adds Gregory.

"Many police areas run Neighbourhood Watch, Business Watch or Community Watch schemes that I would encourage clubs of any size to engage with. This could provide clubs with regular information and advice via a written bulletin, telephone ring-around or text/SMS facility."

They are excellent ways to share information quickly with other concerned members within the community, he believes. "We often receive valuable intelligence about people acting in a suspicious manner, loitering around sports areas with the intention to commit crime.

His final words of advice: "Contact your CPDA or local police Neighbourhood Team to enquire about the schemes running in your area.

But, how secure is 'secure'? A local Athletics Club thought they'd taken the appropriate measures to ensure the safety of their grass care machinery, until, when arriving one morning, voluntary groundsman Robert Franklin realised they'd fallen prey to thieves, who had broken in to their steel padlocked container, taking with them several hand tools.

Groundsman Franklin is also managing director of West Country Steel Buildings, specialists in the supply and installation of horticultural buildings for the last twenty years.

"We're relatively new to the sports sector, but we've definitely seen a growing demand for more secure units," says Franklin. "It is nigh on impossible to completely prevent theft. If thieves are determined then they will break into anything," he adds. "Even the toughest steel is no match for an angle grinder - the tool of choice for many criminals now. What we can do though is minimise the risk by reducing potential access points, with front opening doors and padlocks being some of the easiest routes in for criminals. We only supply a 14-part locking system, which has no padlocks so, short of using an industrial tool, it's difficult to access our units."

The padlock proved to be the weak point for Newport Fugitives, with thieves able to access their shed with relative ease using a battery powered angle grinder. Since the theft, Franklin has installed a modest steel building and all the large machines are now tagged, he adds.

The club is not alone in its desire to boost security. He reports a growing number of golf clubs wanting to secure machinery by installing steel buildings. 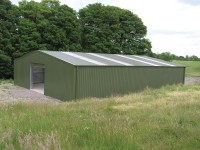 The company also advises sites on the level of insurance they need to allow for any claims they might make - with many insurers insisting security measures are in place for policies to be valid.

Clubs should strive to be "as secure as it is practicable to be", according to John Hodgson, general manager of Cleveland Sitesafe Ltd, which manufactures and installs bespoke or 'off the shelf' all-steel security and vandal resistant products, spanning from small steel transit boxes to large modular steel buildings used for garaging compact tractors and mowers.

Made primarily in 3mm steel plate, buildings can be clad to suit in brick, stone or timber to create a 'softer' attractive exterior that disguises the inner strength of the structure.

"We manufacture to a higher level than insurers require," says Hodgson, who adds that a spate of crime often leads clubs into a false sense of security. "It only affects a limited number of sites and is noticeable for a while. Then there may be no cases for years."

"Simply replacing stolen tools or machinery after a theft is not enough. Thieves may come back to find that security has not been addressed." 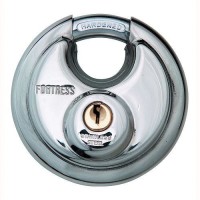 As managing director of Swedish lock manufacturer, KABA, Baker has a firm handle on locking and key control. "No matter how good a padlock might be, there's nothing that can stop determined thieves," he insists. "If the padlock method is chosen though, it's essential to have one that is shielded or shrouded."

"A gate shield steel clamp or lock shield will make it extremely difficult for thieves to break in as the tools often used, like power grinders, cannot physically get to the lock to cut it."

Securing all access routes is one simple but often overlooked facet of security, with traditional entry, such as outward opening doors and windows being some of the most vulnerable aspects of a building.

"It's always best to go for inward-opening doors if the size of the unit allows it," advises Baker. "They're good because they hide the hinges, which are often the weakest part of any door. We would recommend using hinge pins or hinge bolts as well to avoid risk of tampering."

Securing buildings does not have to be expensive, he stresses. One of the easiest ways to guard against window break-ins, or through glazed doors, is by using a simple grill, Baker adds. These can be easily and cheaply bolted on to the front of the window to deliver an effective deterrent. Crucially though, all bolt ends should be cut off so they cannot be unscrewed with professional tools.

Access through roofs is another route worth protecting against, especially if it's a pitched or felt lined one, which can often be cut through easily. A tiled or timber roof would be preferable but, on the whole, the roof is perhaps the least successful route for criminals, Baker believes, especially if they're targeting larger machinery - "after all, it's hard to get a mower through a roof".

"If possible, always take as many precautions as is affordable, as many insurance policies will stipulate such measures," he advises.

Although large machines are harder to steal, professional thieves will, in most cases, be looking to take these big ticket items as they are the most lucrative to sell on. Employing a second line of defence within the building may prove to be the difference between keeping and losing expensive pieces of kit. 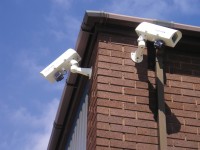 "One of the main issues for security is guarding the perimeter, which is often the best access point for thieves as people can come and go freely throughout the day. Professional thieves will often know at what times a target site will be busy or quiet, so the club needs to also know this information."

"If CCTV is in operation you have to be careful of the blind spots and that cameras are targeting the right areas. People will often put cameras all over the place without thought for their effectiveness. Unless they're monitored regularly, they're of little use."

Another problem with cameras, explains Halliday, is that people aren't scared of them anymore as they're seen all the time. However, recently introduced software called Viseum is aiming to offer a new dimension to CCTV operation, and works by having an array of cameras grouped together with one major camera centrally positioned.

The smaller cameras survey the whole area, whilst the main camera will focus in on an individual, if needed, and follow him or her if something suspicious is detected.