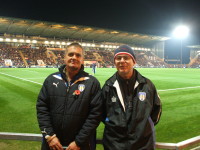 With only 5 weeks and 1 day from the end of one football season to the first match of the next at Colchester United Football Club's Weston Homes Community Stadium last summer, head groundsman David Blacknall was delighted with Limagrain's MM60 ryegrass mixture in which seed is treated with Headstart to help speed establishment.

David Blacknall explains: "I figured that the Emirates stadium pitch is probably the best in the country, and I knew they used MM60. So I thought if it was good enough for them, then it was likely to be ok for us! Last summer, I decided to give it a try myself.

"We Koro-ed the pitch and then reseeded on 26 June [2011]. It was ready for play at the start of August when we held a pre-season friendly game. The grass had established evenly and we had produced a very good playing surface in a shorter time than normal."

Limagrain's Craig Spooner adds: "When there's a short time-frame to get a pitch back into play, then the Headstart seed treatment makes a big difference. In fact, seedling emergence can be an average of four days earlier, compared to untreated grass seed."

Headstart contains a seaweed extract which promotes cell division. This results in faster emergence and a distinct increase in the number of germinated plants which is very important in the initial growth phase of pitches. 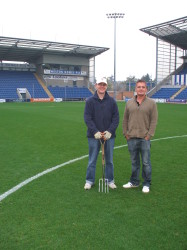 David adds: "The quality of any football pitch is not solely determined by the seed, but by a combination of many inputs and good management, nevertheless I have been pleased with the overall results. This past football season, we've had the best grass coverage since the Club moved to the stadium four years ago."

The quality of the pitch at Colchester United FC has been appreciated by several recent high profile matches including the England U21's 2013 Euro Qualifier game against Iceland last November, and in April this year, the National FA County Youth Cup final between Essex FA and West Riding FA.

This year, weather prevailing, a pitch reseed is planned for 6 June, and once again the advantage of a faster establishment with Headstart will help ensure the pitch is ready for the first match - six weeks later.

For more information on the MM range and Headstart, groundsmen can contact Limagrain UK on 01472 371471 or visit www.limagrain.co.uk/amenity.