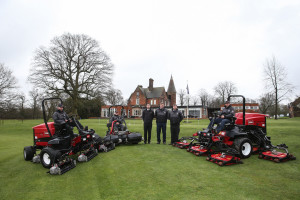 There's nothing like a bit of ingenuity to bring in the results, as Lewis Mattholie, deputy greenkeeper at Brickendon Grange Golf Club, can attest to. And the result is two new beauty spots for the club's golfers to enjoy.

With its 17th hole voted the Greatest Amateur Hole in the UK in the 2016 Grass Roots Golf competition, Lewis and the team at the Hertfordshire club wanted all the club's holes to be equal. And with the problem of slightly stagnating water in two of the ponds flanking the eighth and eighteenth holes to solve, and the occasion of the club's 50th anniversary to mark, Lewis decided it was time to tackle the problem.

"The water in two of our ponds needed some TLC," Lewis tells us. "The water was stagnating a little and starting to smell. I knew the answer was an aerator, but as with most things in life it's a bit of hard sell to get people to buy into something they can't see.

"I figured I could quite easily create a makeshift unit with a hose and end plug to demonstrate the affect of a fountain, so I went ahead and made one!"

The result was the management committee could instantly see how a fountain would rejuvenate the two holes by bringing beauty and tranquillity to them, essentially creating two new beauty spots for golfers to enjoy.

And by choosing Otterbine's Fractional five-in-one aerating system, which combines beauty with function, the club not only benefits from two new beauty spots, but improved water quality too.

The Fractional can be relied upon to keep the ecosystem of any smaller area of water in perfect balance thanks to its ability to transfer an impressive 1kg/2.2lbs of oxygen per hp/hr and its pumping rate of 115m3/ph.

Lewis says: "The water quality has vastly improved. Gone is the problem of stagnating and smelling water, which was perfect timing for the club's 50th anniversary!"

As we've mentioned, the idea for the project came about to mark the occasion of the club's 50th anniversary in 2016 and one member of the club was so taken with the idea they offered to step in and pay for both fountains! Which leads us to ponder the club's nickname of the 'ace of Herts'. While we know it's so named for its geographical location, with such kind-hearted members we wonder if it's more appropriately named the 'ace of hearts'!