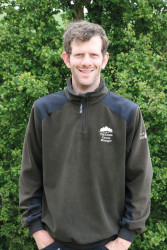 Set deep in the heart of the beautiful Staffordshire countryside, and only six miles from the centre of Stafford, is The Chase Golf Course. It is a challenging Par 72 measuring 6738 yards from the back tees. The course offers a mixture of tricky par 3s and testing par 5s giving the course great variety of play.

The course was built over sand and gravel, allowing fantastic drainage and ensuring play can continue uninterrupted from wet weather conditions twelve months of the year. All the greens are a simple push-up, local soil construction, which are holding their own now that they are getting a balanced maintenance programme.

My visit to the club coincided with another visitor, Mark Allen, Technical Sales Representative from ALS, who was helping Simon take a number of soil samples for lab analysis. Mark and Simon have known one another for many years, having worked together at the Forest of Arden Golf Club.

"Like a lot of my colleagues, I believe it is important to take regular soil samples on the greens," said Simon. "They help me to ensure that they are performing well and not deficient in any key nutrients whilst, at the same time, I can keep an eye on soil pH and thatch levels. A healthy plant, with access to readily available nutrients from the soil, will be able to fend off pest and disease attacks far more easily than one growing in poor or underfed soil. It's amazing what information you can get from taking a simple core sample from the green."

"The mere fact that you can use three of your five senses - touch, sight and smell - to gain valuable initial information about your soil always fascinates me. If it smells of sulphur (rotten eggs), it's a sign of anaerobic activity; a visual inspection will identify thatch levels, any layering issues, root density and depth; whilst feeling it helps to identify the soil classification and how wet or dry it is; a gritty feel will indicate a sandy content, whilst a soapy feel means it has more clay/silt content."

Samples were taken between 100mm-150mm and put in plastic bags, labelling them with time, date and location. 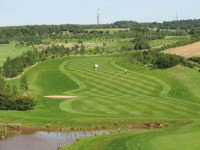 "I was pleased with the look of the samples," said Simon, "as they showed a visual improvement in terms of root development, with white, healthy roots going beyond 100mm, and there was little thatch to worry about, and certainly no signs of anaerobic activity."

"My philosophy is to keep greenkeeping simple, giving the grass plant what it wants and not working to a pre-determined set of programmes because, often, the weather dictates otherwise. It's a case of working with the weather, not trying to do things when conditions aren't right because the programme says so. For example, we often get strong winds here and we have to take that into consideration when spraying feeds, biostimulants and wetting agents."

"When I joined the club back in 2007, my main objectives were to improve the course both aesthetically and functionally. Getting the greens into a condition where they could be played on all year round, without the need for temporaries, was important for the members," he states.

"We've also redefined fairways, semi rough and rough areas to speed up play and give some shape and definition to the course whilst, at the same time, evaluating and enhancing ways to improve the natural environment and biodiversity of the course."

"This has also involved working on tree plantations; carrying out pruning, crown lifting and, in some cases, felling to enhance the course and help improve air flow around greens and tees."

Work on the greens is centred on good cultural practices, with plenty of aeration and effective renovation programmes, with the judicial use of topdressings and feeding regimes to ensure the grass plant remains healthy and able to withstand the rigours of golf all year round. 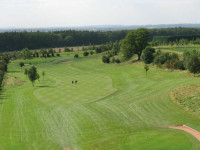 Without doubt, Simon's regimes are working well. The greens looked good and were very firm, especially considering all the wet weather we have had in the past ten months.

"I'm aware that their construction was not to any real specifications and, that on first inspection, the soil profile may not be considered 'ideal' for high quality greens. However, that said, they drain extremely well and we have seen a significant increase in the percentage of Browntop Bent. The greens were originally topdressed with straight sand, but we've seen great improvements since we started using Fendress, so I'm confident the greens will continue to improve and we can keep providing the members with consistent, firm and smooth playing surfaces throughout the year."

"The greens are maintained at 5.5mm during the winter months - we use pedestrian greensmowers - and 3.5-4mm, using the triples, during the summer," explained Simon. "We generally cut them five or six times a week, and give them a 'turf iron', or a rest, on the days they are not cut."

"The deepest aeration we perform is 175mm due to the construction of most of the greens. There is a stony layer that prevents any deeper penetration, so it is a case of varying the aeration techniques." Simon will aerate with mini solid tines and topdress every four to six weeks.

"A reduction in thatch has been achieved by scarifying/hollow coring, regular topdressing and reducing the amount of nitrogen being applied. Our annual input of nitrogen is now down to between 45-70kg per hectare, and is based on providing an adequate amount for a healthy grass plant without encouraging excess growth. Over the last eighteen months we have also started using compost teas within our feeding programme." 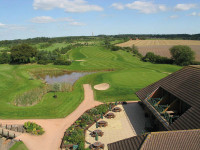 Tees are cut two or three times a week, depending on growth, at a height of 12mm all year round. Fairways are cut twice a week at 17mm, semi-rough twice at 32mm and rough once a week at 51mm.

"Another of our projects has been to clean out some of the rough grass areas, with the aim of sowing native wildflower seed mixtures to provide more colour and biodiversity around the course."

Simon reports to Operations Director, Bryan Davies, meeting with him on a daily basis. "Since we both joined The Chase, five years ago, there has been a dramatic improvement in communication between all parties to ensure that the club members (c800) are aware of the work that is going on and the benefits it brings to the course."

"I'm keen to protect and encourage wildlife out on the course; for example, the members enjoy seeing a pair of kestrels that have, for a number of years, been nesting in a large, mature oak tree. The rough grass project has encouraged more rodents and invertebrates to the course which, in turn, is attracting other birds and mammals."

"We are about to start putting up nesting boxes and will be placing a camera in one of them so that the members will be able to keep an eye on all the activity."

"There is still a lot to achieve in terms of course improvements," continued Simon. "Localised drainage, bunker work, extending and modifying tees, plus the ongoing tree work, are all on my 'to do' list."

It is fair to say that, in the current economic climate, The Chase seems to be getting the balance right in terms of investment both on and off the course. The new owners, Chris and Lesley Simmons, have created a superb indoor health spa boasting a state of the art gym, functional training area, two spacious studios, sauna, café bar, aroma crystal steam room, ice therapy, personal training, tranquillity room and physiotherapy suit. In addition, offices have been converted to provide a hairdressing salon, all of which complement the needs of an ever increasing membership.

Simon and his staff consider themselves fortunate to be working on a course that has great potential, and one whose reputation is growing.

The Chase is a model some other courses could perhaps follow to secure their future. The car park was full and everybody was walking around with a smile on their face, thoroughly enjoying their day's relaxation, whether that was the challenge of the golf course, or simply being pampered!

Simon has been in the industry for fourteen years and has a wealth of experience at all levels of greenkeeping. He studied at Reaseheath College in Nantwich where he obtained an HND in Golf Course Management, an NVQ in Horticulture, PA1, 2 & 6 spraying certificates and numerous industry qualifications.

He began his career at The Forest of Arden Golf & Country Club, where he was fortunate to work on two European Tour events, before moving on to Abbotsley Golf Hotel and Cotgrave Place Golf Club before joining The Chase in 2007.

Since starting at The Chase, Simon has become involved with the Gingerbread Men, a group of greenkeepers in the Midlands and North West, who all believe in promoting fine grass playing surfaces through traditional course maintenance and reducing inputs of fertiliser and chemical. This approach also fits in with Simon's belief in encouraging wildlife and wildflowers out on the golf course.

When not at work, Simon's real passion is football, where he regularly travels the length and breadth of the country, and the world, following both Peterborough United and England. He is also a keen golfer and plays off a 12 handicap.

Nev started at The Chase in 1999 and, after studying for an NVQ2 in Amenity Horticulture at Rodbaston College, has progressed from an assistant greenkeeper to his current position of Deputy Course Manager, a position he has held for the last nine years.

Since the retirement of the club's mechanic in 2011, he has taken on the responsibilities of machinery maintenance. Outside of work, Nev enjoys spending his time in the gym, fishing and watching Wolverhampton Wanderers.

Ronnie has worked at The Chase since it opened in 1991 and was actually involved in the construction work when Terry Edwards bought the land in 1988. He progressed up to the position of Deputy Head Greenkeeper, which he held for three years, before retiring from full time work in 2004 and taking up his current part-time role of Head Gardener.

A dedicated family man, Ronnie has been married to Olwyn for fifty years and has six children, eleven grandchildren and three great grandchildren.

When he does find some free time, Ronnie can be found playing darts for the Bank House in Hixon, watching Stoke City or gracing the dance floor with Olwyn to some good old Rock 'n' Roll.

After studying at Cannock College and obtaining a National Diploma in Sports, Aaron took up his current position in 2007. Since then, he has gained an NVQ2 in Sports Turf at Rodbaston College.

Aaron started at The Chase in 2008 after spending a year working in the landscaping industry. In the two years he has been greenkeeping,

Aaron has undertaken a great deal of 'in house' training and aims to work towards his NVQ qualifications at Rodbaston College.

When not at work, Aaron is an avid user of the gym and enjoys socialising with friends.

Michael originally started work at The Chase at sixteen years old when the golf course first opened. In 2008, he left to move down to London before returning to Penkridge and the golf club in 2010.

Since starting as a greenkeeper, Michael has obtained an NVQ 2 in both Amenity Horticulture and Sports Turf.

In his free time he likes to go fishing, walking and can regularly be seen out cycling.