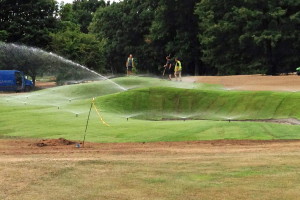 The 16-week project involved the reconstruction of the front nine holes on the club's Outer Course to a design produced by Martin Ebert of international golf course architects, Mackenzie and Ebert Ltd.

Having reconstructed the back nine holes on Royal Mid-Surrey's Outer Course in 2009, MJ Abbott secured by competitive tender in mid-2013 the contract to carry out the second phase of the project, which involved similar major reconstruction works on the course's front nine holes.

Included in the specifications were the creation of nine new greens, a chipping green, turf nursery, new tees, bunkers, 'Taylor mounds' and wetlands. MJ Abbott was commissioned also to design and install a replacement irrigation system for the nine new greens and newly-constructed tees, including mist irrigation alongside 12 south-facing fairway and greens bunkers.

The firm seeded the greens and tees surfaces, and laid 15,000 square metres of fescue turf to the shaped surrounds of the greens, tees and bunkers.

A major factor governing the entire project was the highly-sensitive nature of a site classed as a Grade 1 landscape, located on the Crown Estate within the historic setting of Richmond's Old Deer Park.

Lying within the boundaries of the golf course itself is the 18th century King's Observatory and negotiations were required with English Heritage and the Crown Estate Commissioners to ensure that long-established view lines from the historic Observatory were not adversely affected by the reconstruction work.

Important ecological and physical constraints were faced by MJ Abbott throughout the project, which ran from early June until late September 2013. The first was the presence of badgers, preventing any immediate works near setts located close to four of the nine new greens.

To overcome this, one-way gates were installed by MJ Abbott under licence from Natural England and under the supervision of STRI. Installed at all sett entrances, the gates were monitored for activity throughout July.

Although successful, the action made work impossible on the affected greens until August, resulting in a major push to get the four greens built, drained and sown before the end of August seeding deadline.

A further major element of the project was to design and build the 8th and 9th greens at a level which would raise them above the Thames flood waters.

Because they could not be built high enough to protect them from every flood event, the greens-side bunkers were replaced with 'Taylor mounds', named after J H Taylor, club professional for 47 years and original designer of Royal Mid-Surrey's two 18-hole courses.

To compensate for the raising of the two greens and their surrounds, MJ Abbott lowered designated zones within the flood plain and created wetland areas that have added significantly to the attractiveness of the two holes.

Another concern throughout the project was a 75cm diameter mains gas pipeline laid 1.2m beneath the course.

To prevent any damage to the pipe, MJ Abbott, under the direction of National Grid, installed reinforced concrete pads at ground level to produce fixed crossing points, adding barrier fences along the line to prevent plant and machinery crossing elsewhere. 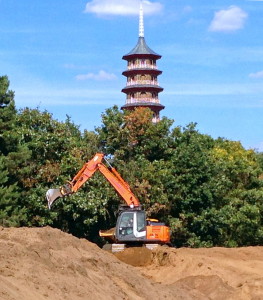 Even with these measures in place, the company had to comply with a maximum vehicle ground pressure and a maximum number of daily crossings.

Project architect, Martin Ebert, commented that standards had remained at a consistently high level throughout the construction works. "MJ Abbott endeavoured at all times to follow the design brief and detailed plans provided to them while demonstrating maximum consideration at all times to golfers, the golf course and its historic setting," he said.

"Royal Mid-Surrey members can look forward to playing the full 18-hole Outer Course again in 2014, using a complete set of top quality greens that have been built to the same design style and construction specifications by the same company," Martin pointed out. "I am delighted that all 18 greens strike a perfect balance, providing a suitable golfing challenge, visual attractiveness, interesting surface contours, great playability and good maintainability."