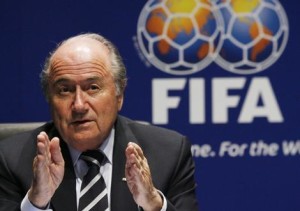 Fifa president Sepp Blatter is determined to switch the 2022 World Cup to the winter because of the intense Qatar summer heat.

The head of world football's governing body plans discussions over the change, which would cause major disruption to various domestic leagues, with his executive committee in October.

He said: "We still have enough time.

"The executive committee will certainly follow my proposal. Then we will have dealt with the topic for good."

Temperatures can hit 50C in Qatar, with games scheduled to be played in air-conditioned stadiums.

But Blatter said: "The Fifa World Cup must be a festival of the people. But for it to be such a festival, you can't play football in the summer.

Read the full story by following the link below: