0 Setting up for Queen’s

The build-up to the curtain raiser for Wimbledon fortnight is accelerating as The Queen's Club prepares to serve up its week-long championships just days before the world's premier Grand Slam tournament opens its doors. With a new sponsor this year, the experienced team will also have a colour scheme change to deal with. Greg Rhodes discovers more. 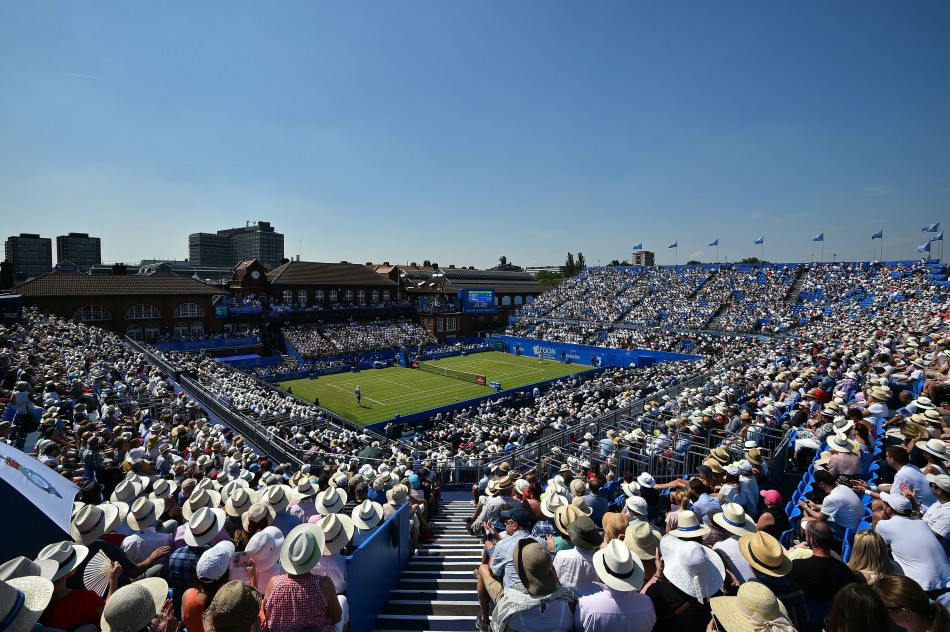 The Queen's Club's provision spans the breadth of surface types - manicured grass, shale, acrylic and sand-filled synthetic. Players of all standards stride out onto any of them knowing they will practice and compete on some of the world's finest courts, lovingly prepared for them by head groundsman Graham Kimpton and his turfcare team.

Queen's, as it is affectionately referred to, is already in the throes of build-up to its annual grass court championships, to be held from 18th to 24th June, under new sponsor Fever-Tree, only the third title sponsor in the ATP World Tour 500 event's forty year history.

The club is constrained by urban development lining its perimeter. With twenty-seven outdoor courts and ten indoor ones, the scale of operation is immense.

Established in 1886, it claims to be the first multi-purpose sports complex ever built. Named after first patron Queen Victoria, it's renowned as one of the planet's top lawn tennis and racquets clubs.

Having hosted as many as twenty-five different sporting activities besides tennis, Queen's has witnessed ice-skating, baseball, athletics and rugby amongst many others. Engaging with the public is something it knows plenty about.

In May 2007, the club's members acquired a 120-year lease from the LTA, giving them autonomy to run the club through a fully-elected board.

Since then, they have "sensitively invested" in facilities, completing key projects such as resurfacing four artificial grass courts.

ATP tennis events plus the World Rackets Championships, leading Real Tennis events including the British Open and, between 2009-2013, The ATCO Super Series Squash Finals all number among its record of achievement.

Recent scale-up of the championships in what is already a tight urban venue presents the organising committee, logistics and ground management teams with a correspondingly larger task to deliver the venue ready for opening day.

Last year, site manager John Hester briefly basked in the media limelight, pictured with two-time championship winner Andy Murray, who presented him with a 'Services to the event` honour before being quizzed by commentator John Inverdale about the demands of what is a marathon year-round co-ordinating effort to set the stage for world class tennis attracting burgeoning attendance.

Subcontracted to the LTA, John has been involved with Queen's for thirty-three years. "I started as a chippie/joiner erecting and repairing fencing then moved to managing the build-up of what was then the Stella Artois Championships.

By now, I suppose I know where everything is and where it needs to go," says John, whose longstanding tenure at the club has been extended recently for another four years. 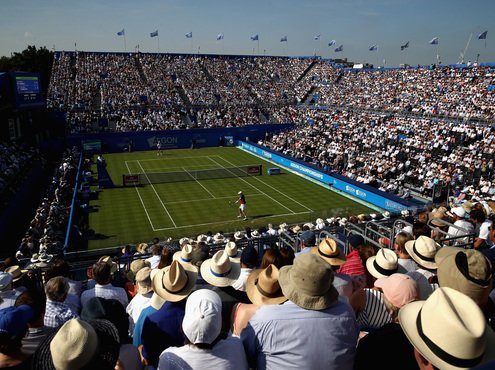 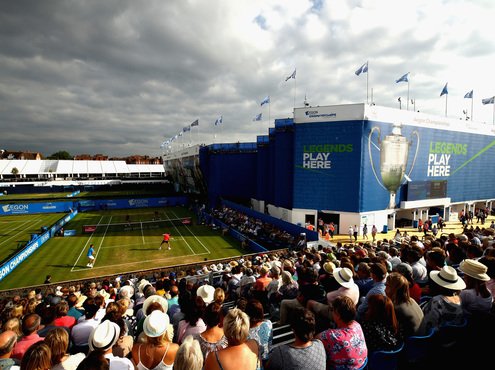 Working with The White Company earlier in his career took John around the world working on ice hockey, golf and rugby events as well as the 'Round the World Yacht Race', so he certainly knows his way around.

John has to perform as an ambassador of charm while he's involved with the tournament - almost as important an element of his job as managing contractors and trades.

"Remember that members are losing their facilities for two and half to three months each year, so we need to keep them sweet. Mostly they seem happy with what we are doing, but you can never take their goodwill for granted," he says.

"Health and safety is so much more prominent than when I first started and that takes much of my time, given the amount of electrical gear and cabling that's brought on site."

His job is a skilful balancing act, interfacing Queen's management and members, he says, and it's one that starts early doors. "Because we are in a built-up area, suppliers have to travel as early as possible to avoid traffic delays. At 5.00am they turn up with a police escort and drive on to the ground via Greyhound Road, to park on what had been, until very recently, many of the outdoor courts."

Build-up starts in earnest six weeks before the championships begin. Three of Queen's acrylic (Plexi) courts in the back compound go under two layers of robust aluminium sheeting to protect the precious playing surfaces as materials are fork-lifted from juggernauts, and other delivery vehicles unloaded, with up to fifty contractors, subcontractors and suppliers ferrying in everything from marquees, hospitality furniture and planters to heavy electrical gear, cabling and the structural elements of what transforms into Queen's version of Centre Court, the 8,500-capacity stands erected by longstanding tournament partner Arena Group. 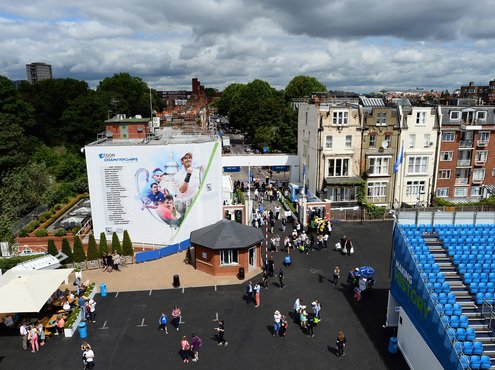 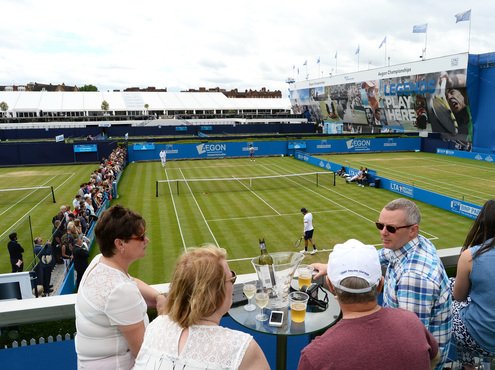 Switch of sponsor will create added demands this year as colour schemes and branding across the venue change, notes Arena Seating managing director Dave Withey, who has been overseeing involvement with the event since its earliest days.

"In the first years, we supplied just 500 seats and some hospitality tents. The scale-up since has been incredible and we now supply 10,000 seats, including those for a stand on the other show court."

"The site is incredibly difficult, with vehicles having to negotiate the back streets of West London but, like John, who we work shoulder to shoulder with, we've been doing this a very long time, more or less every tournament."

Every year, the tournament dimension shifts, John says. "Two years ago, the front end of the club was changed to accommodate the North stand. Graham had to move courts elsewhere, so it was a big operation." 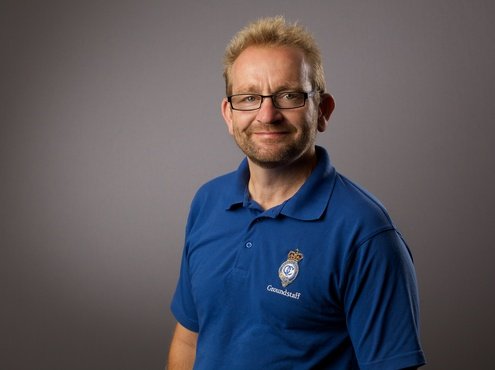 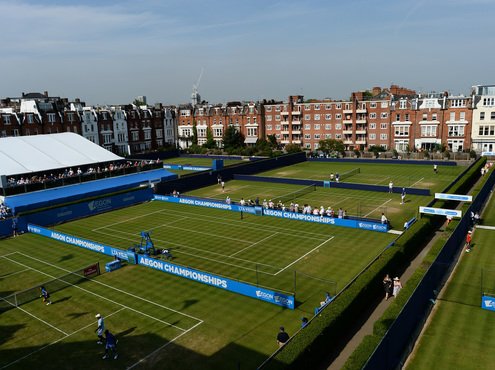 There's a new substation on site too and uninterruptible power supply (UPS) connecting electrical boxes to marquees and acting as a failsafe if we suffer a power outage."

Everything must be in place before the tournament proper begins as qualifying weekend beckons, says John - as competitors vie for a place in the first round, watched by the public but limited to 500 on site.

With no dedicated, permanent trunking available, cables have to be run through and around the temporary stands, all to be in place before the qualifying weekend.

The BBC broadcasts ball by ball coverage throughout the championships and John has to ensure they are amply accommodated as they position cameras and set up their studio box between the top of the south and east stand. "All other commentary boxes sit on top of the south stand," John confirms, "not forgetting the cabin housing Hawkeye, and we have to allow access on court for them to mark out so the system can do its job."

Wednesday before the qualifying weekend, the build-up team is preparing the players lounge, catering areas, laying floors and carpeting. Indoor clay courts 7 and 8 go under robust temporary flooring to accommodate them.

The media centre, meanwhile, requisitions all three squash courts and one of its iconic Rackets courts as artificial artificial turf protects their playing surfaces and false walls are erected before the bar and catering facilities move in. 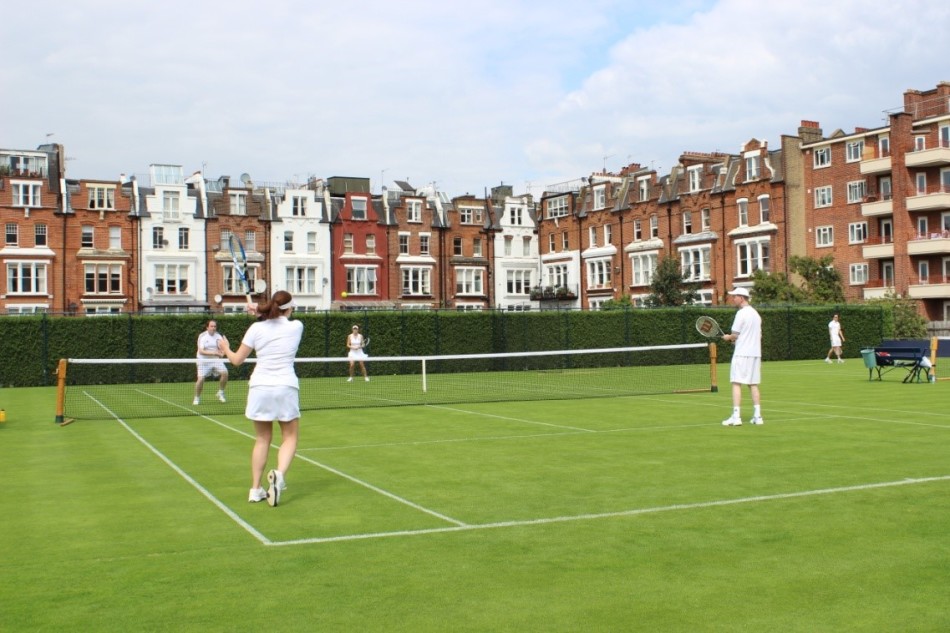 The club's other rackets courts don't escape either as the build-up team brings them into service as the tournament offices.

Hospitality areas take out indoor clay courts 3 to 6 as the Queen's tournament village takes shape. Sturdy foam rubber covers the surfaces to take marquee steelwork, flooring and fabric coverings. Once the twin-level structure is erected, carpeting is laid upstairs, whilst green "Astroturf" surfacing goes down over the marquee floor in the bar, first-aid and other public areas.

In total, the infrastructure affects no fewer than twelve indoor and outdoor courts as the scope of the event expands.

After the event, the take-out begins in earnest. "We have three weeks to clear the site, beginning with anything that can be stolen," says John - "furniture, TVs and so on. The team work through the Sunday night to remove everything."

If it all goes to plan, as it invariably does, members reclaim their club to enjoy the varied sporting provision once more - until they spy John Hester on site again and know that the annual logistical earthquake is about to rumble again.