Alan Ferguson, Group Head of Grounds and Estates at St George's Park, home for England's twenty-four national teams, needs little or no introduction. The former Ipswich Head Groundsman is responsible for all 12 pitches at the 330-acre National Football Centre in the Staffordshire countryside, as well as the wider estate. His remit also includes over-seeing the playing surface at Wembley Stadium. That represents a lot of 'cleaning' to be done after games and training, Alan had watched carefully the development of the Allett RM34 Stadium Mower as a potential solution to the centre's pitch cleaning problems. 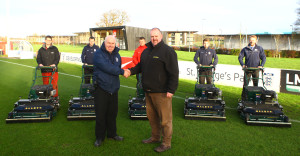 "We had a trial with a demonstration machine on loan in August to September 2015 and were immediately impressed with the way the Allett performed," says Ferguson. "With the extra width, (860mm/34") the roller and vacuum effect, it saves an immense amount of time and manpower in the clean-up process after matches. In fact we were so delighted with the Allett we ordered seven machines and took delivery in December. They really are the ideal solution and are in use on all the pitches."

Specifically developed with and for stadium groundsmen, the Allett RM34 has a twin-bladed high-lift system that cuts and vacuums quickly and efficiently to clean up after matches or mow higher during grow-in. There's a micro height adjustment between 15mm and 75mm for exact blade cut and a 5 gear speed selection for precise control. Solid and substantial to use the RM 34 is surprisingly light and also has an optional front fixed brush strip available. The primary role for the Allett machines at St. George's Park is to cut and remove the loose grass on the surface of the pitch which, if left to break down and decay, forms algae on the surface which is not only slippery but leaves the pitch open to risk of fungal attack, disease and a build up of thatch.

"There's the 'golden hour' after training or a game to clear this debris," says Alan, "and that is where the Allett RM 34 is so fast and effective, substantially cutting the time we used to spend getting the pitches back into shape." As well as the work done at St. George's Park, Alan's team will be relocating three of the Allett RM34 mowers to the training base in France as part of the national side's maintenance support on the training pitches for the European Championships in 2016.