0 Seven from the Severn at New Road 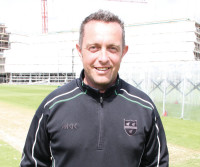 It has certainly been a tough twelve months for cricket groundsmen, with one of the wettest summers on record followed by one of the severest winters. For many County Cricket Club groundsmen, the poor winter weather provided an even bigger challenge, with many expected to get pitches ready for net practice and games in mid March.

With temperatures remaining in single figures, some county clubs resorted to using marquees to help provide outdoor net pitches, as reported in the last issue.

However, one club not only had to put up with the ravages of the weather but also had to cope with several floods across their ground since last May.

Worcestershire County Cricket Club's New Road ground is no stranger to flooding sitting, as it does, alongside the River Severn. One or two a year are almost to be expected but, in the past twelve months, the ground has flooded 'seven' times!

The first of these was a partial flood, covering some of the outfield, on 1st May, followed by another on 15th July, and another on 27th September, the latter just a couple of weeks after end of season renovations had been completed.

Head Groundsman, Tim Packwood, explained that, whilst these partial floods are an inconvenience and rarely reach the square, three in a summer was pretty unusual. Contingency plans were in place for the county's home games to be played at their outground in Kidderminster but, in the eventuality, and with Tim's proven cleanup methods working their magic, all last season's home games were played at New Road; those that weren't cancelled because of rain, that is!

With the ground remaining at saturation point after the summer deluge, and the River Severn running high, Tim was expecting the worst during the winter, which is the more 'traditional' period for a New Road flood! And so it transpired, with a partial flood on 26th November, and the first major flood, covering the whole ground, occurring on Christmas day! The water reached a depth of several feet and remained for a couple of weeks. No sooner had cleanup been completed, the river broke its banks again on 30th January and, once again, covered the whole ground.

This flood was accompanied by freezing temperatures, and you would have been more likely to see Torvill and Dean on the outfield than Tim and his groundstaff, as ice made any cleanup and restorative work impossible.

It wasn't until after the last of the floods - a partial one on 15th February - that Tim was able to get on the field of play. To assist him, he called in local sportsturf contractor Phil Day to power brush the silt deposits off the square and outfield. With the sward in a very weak state, this operation was not carried out too aggressively to avoid putting it under any additional stress. 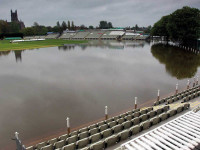 Once the cleanup had been completed, the square was oversown with a DLF Trifolium mix of 25% Ligala, 25% Fandango and 50% Sirtaky, and the outfield with DLF Trifolium Pro Master 45.

Tim calculated that, over the winter, the floodwater had covered the square for thirty-eight days and the outfield for sixty-two.

With the Worcestershire coaching staff and players keen to undertake pre-season practice, the club erected a marquee at their second team training ground at Chester Road, Kidderminster, with Tim and his team dedicating time and resources to producing a block of practice wickets, using a combination of blowers and heaters to help dry out the surface. Overall, the marquee worked well and enabled the players to train at home, at a cost of around £10,000, a lot cheaper than having to invest in going abroad. The club also played two pre-season friendlies at Chester Road whilst New Road was being readied for the season.

Worcestershire captain, Daryl Mitchell, could not speak highly enough of the job done by the county's ground staff. "Tim Packwood and the lads have given us great facilities to play on. We have to say a big thank you to them."

"The condition of the outfield at Chester Road was tremendous, given the weather everyone has had. The wickets were true and the nets were great."

"I know a few other counties have used marquees like the one we had, but ours was the best I've seen. It was amazing to be able to play, when you think that it was still snowing outside."

Like many other county groundsmen, Tim is always looking at ways to improve his working methods and has been watching, with interest, the trials that Keith Exton at Glamorgan undertook with LED lights under his hover cover, as he saw this as a viable option to aid grass recovery after floods and during the winter months.

So, with the ECB currently conducting trials on the LED lights at Loughborough University, in an effort to formulate the findings, Tim, Keith and Gary Barwell at Edgbaston are currently trialing an alternative patented Co2 growing system from SeeGrow Developments Ltd.

Tim first saw it in operation at the Millennium Stadium where head groundsman, Lee Evans, was using the system to stimulate grass growth on heavy wear areas, especially in and around the entrance to the pitch.

The technology is based on greenhouse propagation techniques that have been around for many years, using grow lights and Co2 enhancement to grow crops more quickly. The use of modern, lighter materials enables these systems to be very mobile meaning, in effect, that the greenhouse can be brought to the plant to stimulate growth.

Each unit covers an area of 12 x 5 metres although, if the trials prove successful, plans are in place to provide one that can cover a complete wicket 24 metres long, and also high enough to accommodate the use of machinery whilst in position. The company are also carrying out feasibility studies to place a system integral to the practice marquees used by many grounds for winter practice.

The combination of heat, lighting and Co2 enrichment can produce 10mm of growth in twenty-four hours at winter temperatures and, it's fair to say that, even after being in place for just a short period, there was a marked difference between grass cover inside the greenhouse than on the outside.

As you might expect, the company have been very supportive and are also keen to see for themselves how well the system will work in a cricketing environment. They have loaned the greenhouses to the three clubs, whilst the club pay for the transportation cost, Co2 and power.
It costs around £300 to buy enough Co2 to last two months. This Co2 comes from waste industrial gas sources that would normally be emitted to the atmosphere. Normal atmospheric Co2 levels are approximately 350 parts per million (PPM). With the use of a PLC the Co2 levels inside the units are maintained at approximately 1500 PPM, ensuring that, when adding extra light, photosynthesis and the Calvin cycle is balanced.

The lights are put on in the evening or when natural lighting is low.

The system uses 80% less power than current traditional sodium lighting rigs due to the emphasis not being the focus of light alone, but the creation of the ideal atmosphere - heat, light and Co2. Inside, there is a distinct 'smell' of a growing atmosphere as you might experience in a greenhouse environment.

I was able to witness how easy it was to move the system and how much room there was to be able to water the grass whilst inside. Tim is mindful he will have to monitor watering, as the increased air and soil temperatures will soon dry out the profile.

The timing of the trials could not have come at a better time for Tim, as he aims to stimulate much needed grass growth on his square following the floods and cold weather. He is also keen to see how the system performs to aid grass recovery on a used pitch, once it has been repaired.

In the twelve years Tim has been head groundsman at New Road, he says he has never had such a difficult start to a season, but is optimistic that all will come good once the better weather returns and they can get back into their normal routine. A new Toro 5400D Reelmaster five gang cylinder mower will certainly help to speed up the cutting time on the outfield.

With construction work continuing on a new 120-bedroom Premier Inn and restaurant, the club remain committed to their New Road home, despite all the pitfalls. The development will also include new conference and executive suites for the club and will be built above the 'high tide' mark, much like the Graeme Hick Pavilion, a £2m project that was completed in 2009.

The construction programme has been timed to minimise disruption to the 2013 cricket season, and the new club suites were expected to be completed by early June, with the hotel and restaurant scheduled to open in October 2013.

Whitbread, Premier Inn's parent company, is investing £7.5m in the new hotel and restaurant, whilst the club has contributed in excess of £3m in the new facilities. The two developments will eventually create more than forty-five new jobs.

And, if floods, the weather, lighting trials and a building site weren't enough, coming in to the season, Tim also had to employ new staff members due to Sarah Addison and Robin Saxton leaving New Road to take up positions at Glamorgan CCC's SWALEC Stadium.

He has moved Damon Willetts across from Chester Road to work as his assistant, appointed Steve Gravenall, a long time Worcestershire supporter who was keen to join the staff, together with Luke Weston, their new apprentice. Long serving Martin Watts complete the team.

Who'd be a head groundsman? Tim Packwood for one, a man who is certainly up for a challenge.