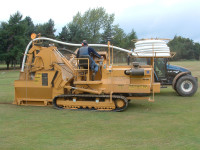 Weather conditions this spring hold no terrors for a south Yorkshire golf course despite the fact that it's built on clay and experiences an annual rainfall of almost 1,000mm.

The 120 acres of Abbeydale golf course, on the outskirts of Sheffield have undergone an extensive drainage project - begun in 2003 and now almost complete - that has made the once waterlogged course, playable in all but the most extreme conditions.

"We're clay based with traditional greens and in 2003 we had no drainage" says Head Greenkeeper Warwick Manning. "J Pugh-Lewis came in and installed pipe drains on the worst affected fairways returning every year since then to do a bit more."

"This course is over 80 years old and any existing drainage had collapsed," recalls Tim Pugh-Lewis. "The challenge back then was to find suitable outfalls as the topography of the course dictates that the water has to be taken in many different directions." Pugh-Lewis initially put in around 11,000 metres of pipe drainage on the worst of the affected fairways as well as some additional sand bands.

"As time went on," Tim continues, "what started out as the wettest areas of the course, once drained, became the driest and so we moved on to tackle other areas which were originally thought to be fine but were now amongst the worst."

"It's been such a big undertaking," concludes Warwick. "This year they'll be doing a bit of pipe drainage and some sand-banding where we need to remove surface water, but they've virtually finished the course. There's been a massive transition between the playability of the golf course as it was in 2003, and as it is now. The drainage has helped us both during the winter and the very wet recent summers."

J Pugh-Lewis has completed extensive drainage projects on many other golf courses around the country including Royal Lytham & St. Anne's, into which some 7000m of drains were installed as part of a move by the R&A to improve drainage on the championship courses. In 2012 the links course will be hosting the Open Championship for the first time since the drainage works were undertaken.