Established in 1880, Kingsdown Golf Club is a club with longevity. It is the oldest club in Wiltshire and has outlived all but 12 English clubs, even its greens machines have outlived the competition! 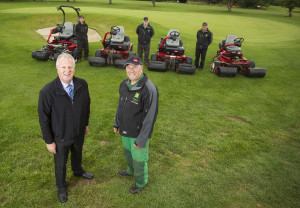 Most recently the club has invested in its seventh generation Toro - a Greensmaster TriFlex 3400-D, which joins the club's Greensmaster 3100 and two Greensmaster 3250-Ds in what course manager Mark Ford calls an "impressive line-up with a focus on long-term value."

He says: "We have been buying Toro since 1979 and this is our seventh generation Toro and joins the three we have in use. We simply cannot dispute Toro's long-term value when we have a Greensmaster 3100 in the fleet with over 6000 hours on the clock still performing well. All our Toros are excellent; in all the years we have had them it's rare that there's been a problem. The build quality and cutting ability in all the machines are second to none, which is why we continue to invest in them."

Mark who has been at the club for 38 years and his five-strong greenkeeping team have built up a combination of mowers based on value as well as performance. "At 23 years old, the Greensmaster 3100 is an oldie but a goldie," he says. "Ours is now used for verti-cutting the greens and we wouldn't be without it. It's got such clout and always gets the job done.

"The Greensmaster 3400-D is an impressive machine with power and precision for greens cutting. The low RPMs mean the engine lasts and lasts and the impressive cutting units can go as low as 2mm. We find it particularly good for thinning the greens."

The team is using the 3250-Ds on the tees and approaches on the academy course and are finding it to be a particularly versatile machine. It has been adapted slightly for the club's specific needs with the reels switched to 8 blades instead of 11. The TriFlex has been added to the mix for its speed and suspension and Mark says that it's this machine that has brought the collection up to date.

"Looking at the seven generations it's easy to see how the technology and design has progressed," he says. "It is especially evident in the way the machines move. The way the units are carried has changed and with that the machines are more smooth, you could almost say they glide across the turf now."

The Toros are used on the 18-hole course, a 20-acre driving range and three-hole academy course. "Our machines are put through their paces. The excellent drainage here means play is possible all year round, but that doesn't phase any of the Toros."