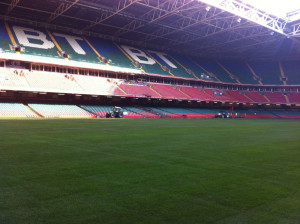 It takes a battering from burly rugby players and nimble footballers - and now the Millennium Stadium pitch is getting a well deserved make-over, using giant "sewing machines". Up to 21 million artificial turf fibres are being stitched into the natural grass roots at the Cardiff venue.

Two specialist machines will create a tough hybrid surface ready for November's rugby internationals. Stadium bosses say it will "greatly improve" the playing surface. After a fortnight of sowing grass seed at the iconic venue, the sewing together of natural grass and the artificial turf is expected to be finished by the end of the week.

In total, the number of fibres used will equate to 86,400km - or 53,700 miles of twine, more than twice the circumference of the earth.

One month later the transformed turf will be ready for the autumn rugby internationals, when Wales takes on Australia, Fiji, New Zealand and South Africa.