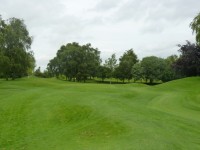 palding, known as "The Heart of The Fens", is well known for being the home of the barcode and its annual tulip parade as well as for its agricultural and horticultural industry. But Spalding's hidden treasure is its golf club, dating back to 1907, and the 18-hole golf course which is regarded as one of Lincolnshire's best.

The course at Spalding has seen many changes over the years, with much of the original back nine lost to the war effort in the 1940s. Since then the course has been expanded as adjacent land has become available to now stand as a testing par 72 at 6527 yards. Despite the numerous alterations Spalding has retained many of the original features which characterise the golf course, including the memorable par-4 2nd hole that requires a drive across the River Glen before an approach over former salt excavations.

Sandwiched between two major drainage rivers Spalding Golf Club enjoys its status as a small oasis in the middle of South Lincolnshire's Deeping Fen. However, with a keen eye on the future, the golf club have set about creating a long-term development plan and have employed Swan Golf Designs to help them achieve their goals for the golf course.

SGD's work is now underway with an initial assessment of the course's design, condition and performance, from which recommendations for improvements will be derived. These will include how best to manage water, both in terms of removing it from playing surfaces and recycling it for use in the irrigation system, as well as identifying opportunities to lengthen the course and better define its playing strategy.