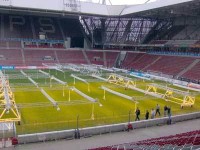 In the UK the SGL Concept is slowly but surely building up its reputation. More and more stadiums are interested in the possibilities of the revolutionary concept.

SGL was already the first to treat an entire pitch at PSV Eindhoven in the Netherlands. The project at PSV is already into its second year and, just like last year, the results are very good. People at PSV are very satisfied and are convinced that also this winter, when PSV continues its adventure in the UEFA Champions League, the Philips Stadium will have one of the best pitches in Europe.

This also shows by the fact that the Philips Stadium was assigned this year's UEFA Cup Final. This summer the Philips Stadium will even host several concerts of a famous Dutch artist. Before the SGL Concept this was not possible, because the condition of the pitch did not allow it.

But now Arsenal has joined the Dutch champions. SGL is now also the first in the UK to treat an entire pitch. Arsenal started the treatment of the full pitch in October this year. Highbury is already known for having one of the best pitches in the world, but with the help of the SGL Concept they hope to keep a year round high quality consistency. The first results are very promising. The grounds team of Arsenal are very satisfied with the condition and growth of the grass.

Besides the project at Arsenal, other venus were added that are not just used for football.The pitch at Swansea New Stadium in Wales has been treated with 1 unit since October. Also the huge Twickenham rugby stadium began using the SGL Concept as of December.

The Twickenham Stadium, home of the Rugby Football Union, is known for hosting big international games and concerts, such as that of U2 and The Eagles. With a capacity of over 75.000 it is the biggest stadium SGL has been active in so far.

But that will change this month. Then the Irish Croke Park Stadium, hosting up to 82.000 spectators, will start working with the SGL Concept. The pitch will be treated with four mobile units. Also in SGL's home market, the Netherlands, the SGL Concept is expanding. In the Abe Lenstra Stadium of S.C. Heerenveen, two units have been used since the beginning of December to treat parts of the pitch.

Newcastle United started with one unit in November 2004. As with PSV, results were very good. Therefore Newcastle decided to expand the project and are now expanding the SGL Concept with four mobile units.

For further information about Stadium Grow Lighting B.V. you can Contact Nico van Vuuren at:-