This year, golf's Open Championship does its periodic migration south to Royal St George's at Sandwich. The course is as stiff as any served up by St Andrews et al and has a proud history of great Championships.

It is a superb venue for playing and watching golf: a single course in 400 acres of space with natural undulations to challenge the golfer, and open vantage points for large numbers to see play unhindered. This year's is the fourteenth Open to be held there since the first, back in 1894 when, incidentally, it was the first time it had been played outside of Scotland. Henry Cotton, Bobby Locke, Sandy Lyle and Greg Norman are among those to have triumphed here.

When I visited on a raw January day, July 14th seemed light years away, but definitely not to the greenkeeping staff. The stated objective of everyone at Royal St George's, according to Club Secretary, Christopher Gabbey, is always to keep the course in championship condition, but this summer's goings on are special, and you could feel it just walking out on to the windblown links.

Graham Royden, who has been a greenkeeper at the south's most famous links course since 1992, took over the reins in October. He had been deputy there for fourteen years and worked on the two previous Opens. Now, as acting head greenkeeper, he describes preparing a course fit for the best players in the world as an honour. He leads a team of twelve and, despite a difficult winter when three or four weeks were lost because of the snow and ice in December, preparatory work for this major has progressed well and things were back on schedule. A ten or twelve hour working day, six days a week, for all of them must have had something to do with this catching up.

The day I was there Graham was joined by his new assistant, Paul Larsen, who was anything but a stranger to Royal St George's, returning to the course where he had spent a number of years as a greenkeeper before a spell as a head greenkeeper at a Dutch course. Club Secretary, Christopher Gabbey, describes the club's new course management as well bonded and with years of local conditions experience.

STRI agronomist, Alistair Beggs, is retained by the R&A to advise Royal St George's regularly, and the 900-member club reckons its course is going to be in even better condition than it was for its last excellent Open in 2003, won by American, Ben Curtis.

The fairways are expected to look and play better than ever. Lower cutting and 'boxing off' is recommended these days, plus intensified sanding and brushing, methods which are paying off, says the club. The insistence, by the R&A, that Open fairways must now be cut in a single direction - presumably for television aesthetics - means that more men and more machines will be needed for mowing four or five weeks before the Championship and over the four days. The usual 'light and dark' cutting regime used on the course fairways has to be abandoned, though is a quicker operation and involves less man and machine power.

Fairway mowing for a couple of months switches from a two-man job to a six-man job. Like it or not, Graham and the Royal St George's greenkeeping team will have to follow the precedent set at St Andrews last year of 'all one colour' as you look down the Open fairways.

This summer, to accommodate the R&A's one way look, preferred equipment provider John Deere, care of Kent dealers Godfreys, will be boosting the firepower, and Royal St George's will be engaging four more greenkeeping troops to handle the long-winded journeying backwards and forwards, tracking back via the rough. Royal St George's ranks will have to be increased by up to ten greenkeepers for Open cutting duties over all, and there will, of course, be technical support manpower from John Deere and Hunter Grinders to see that these run unerringly smoothly.

In this, and other Open years, normal course work routines at Royal St George's are brought forward by two months. Indicating how bad things had been this winter, snow mould put in a maiden appearance at the famous course. It had never been seen there before, but the exceptional conditions meant it put in an unwelcome, albeit minor, debut on the 4th green and first tee.

Forewarned is very definitely forearmed and Paul says the club's own weather station, linked to its computerised RainBird irrigation system, plus regular checks with the Met. Office weather station at nearby Manston, give him a pretty accurate idea of what's coming. There was a two or three day window of opportunity, as Graham calls it, after the late November cold spell and ahead of significant snow in early December. He used the forecast lull before the storm to apply additional preventative fungicide, Chipco Green, to all the greens and tees. The spraying did its job by and large, thank goodness.

On a short winter's day, however, fine tuning the green stuff was not top of the list. It was very much bunker time. Their faces take a real battering - those that are south facing faring the worse - and getting them in the best possible shape, literally, is a major priority. I can testify that Royal St George's greenkeepers' faces were taking a battering too as they rejuvenated the bunkers in a Force 8.

It's what links care is all about, and being wind-resistant goes with the territory. They will surely - and rightly - be 'mentioned in dispatches' in the welter of fine words that will go with the presentations on July 17th.

Revetting the bunkers and re-turfing the surrounds in normal years at the club is a late February early March job. In the run-up to an Open, Royal St George's would hope to get it done by Christmas. The weather, however, held things up, but it was in full swing in January and still in good time for early enough completion. It is a big, big job and involves the whole of the greenkeeping staff. The idea, in an Open year, is to give bunkers an extra month or two to bed down, knit together and look mature and natural when the world's top pros have to avoid or tackle them. 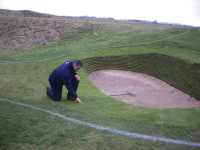 Graham took me to see work on the Par-3 16th, where revetting of the four bunkers ahead of the green was nearing completion. Revetted turf-face bunkers are a characteristic feature of seaside links courses. They are literally turf blocks laid in staggered brickwall style, with the whole face gradually stepped back towards the outer edge. It is a skill to admire and a very labour intensive job. At clubs like Royal St George's it's an art passed from one greenkeeping generation to another. It takes a couple of skilled greenkeepers between two and three days to complete an average sized bunker. Graham told me that, for the 16th project alone, six of his staff had been engaged on it for a whole week.

Turf used for revetting comes from the practice ground, and back-filling material is simply soil and sand taken from other parts of the course. When the actual revetting is done, turf from around the top of a bunker is stripped and replaced by fresh 100% pure fescue turf supplied by Lincolnshire grower, Tillers Turf. Back in December, Graham had ordered 1500 square metres for the job and the final delivery was due any day.

Showing how important bunkers are to the Open Golf Championship, and the workload placed on Royal St George's greenkeepers in this area alone, Graham says that, in recent months, thirty-seven bunkers have been revetted. Hard work at an unfriendly time of year it may be, but there is obviously huge satisfaction in rejuvenating a worn out bunker and, according to Graham, it's a popular job.

Graham and his team were, at this time, working flat out for their next immediate goal - a scheduled mid-February inspection visit by the R&A's Chief Executive, Peter Dawson, and the STRI's Alistair Beggs. The aim was to show them that the winter programme had been successfully completed, notably the bunker revetting and surrounds. Suitable mowing of greens, tees and fairways, plus appropriate edge defining, we understand, ensured that this official walking the course was a step successfully ticked off.

After this, it was to be bunker re-filling time. Graham told me they had 500 tonnes of screened sand ready for this from the club's own local source. Two of his staff had spent a couple of months excavating and screening sand from coastal dunes with the permission of environmental stewards, Natural England.

Aside from its prowess as one of the great links courses, the Royal St George's Club has one other very special claim to fame - James Bond or, more particularly, his creator, Ian Fleming. The author was a long time member there and, a day or two before he died in August 1964, he was appointed Club Captain-elect. What turned out to be a fatal heart attack actually struck him after playing the course and lunching there.

The Royal St George's course is a significant backdrop to a couple of chapters in one of Fleming's best known Bond novels, Goldfinger. Surely one of literature's most colourful golf matches when 007 gets the better of Goldfnger and his henchman Oddjob was definitely written with the Sandwich course in mind, though referred to as Royal St Marks. It was, however, filmed at the Stoke Park Club at Stoke Poges in Buckinghamshire, so the famous links link is in writing, not on film.

Royal St George's prides itself on being an understated and very private club. It makes very little of its Fleming-Bond legacy, but its bar will always be where the phrase 'shaken, not stirred, was born, and its greens and fairways where Bond and Goldfinger's golfing battle was created. They'll certainly be battles ahead this summer on the Royal St George's stage.

If the wind blows come July 14th, even for the world's golfing elite, getting around the Sandwich Open for the Claret Jug will be anything but a picnic, just like revetting a bunker in January.