The date is Sunday 18th March, and Pitchcare have arranged for me to visit Molineux to meet the groundstaff and watch 'my team' take on the home side. The game was being televised as part of Sky Sports' Super Sunday and was scheduled to kick-off at 1.30pm.

I arrived at the ground at 8.30am, where I was met by the club's Head Groundsman, Wayne Lumbard, who introduced me to the rest of the groundstaff on duty for the day.

The first task of the day was to mark out the pitch, which they were stringing out. Wheel to wheel linemarkers are preferred as Wayne believes they give a better, stronger line.

I asked Wayne about his preparation, and he explained that they water a lot prior to a game, using the automatic sprinklers, and also on the day of the game, usually right up to kick-off. I do this also, but have to move tripods around!

The infield irrigation is a great asset; I have a sprinkler system around my pitch, but none within the playing area. I am hoping to have them installed at some point.
They were using a different paint to the one I use, and talked me into trying a tub on my pitch which I will give a try.

I love the idea that teams are only allowed forty-five minutes to warm up on the pitch. On my pitch they arrive about two hours before the game and, within half an hour, are on the pitch causing all sorts of damage! I would love to be able to have a specific warm up time; it would help so much with wear on my pitch.

I was impressed how the staff worked together as a team, all taking pride in what they were doing to ensure that the pitch looked and played at its best.

Wayne explained that they cut the pitch on the day, unless the weather looked bad, in which case they would double cut the day before. Dennis cylinder mowers are used. They give a fantastic finish and the team created some good patterns for the 28,000 spectators in the ground and TV viewers. 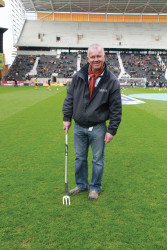 Once the marking and cutting had been completed, practice goals were put out alongside the main goals, to keep warm-ups away from the goalmouths.

I helped out with divoting the pitch prior to play, at half time and at the end of the match. I was impressed to see around 85% grass cover; not bad considering the usage the pitch gets in its stadium environment.

Wayne and the team worked an eleven hour day, which is about what I do back home. The difference is, I'm on my own!

Wayne then went on to explain his maintenance regimes. At the end of the season they Koro off 10mm, and then apply 80 tonnes of fibre sand. The Koro work, and reinstatement, takes about six days to complete with play able to commence six weeks later.

The price of the fibrelastic is the same as I pay for normal sand to be delivered to my stadium!

Fertilising is undertaken every seventeen days. That is something I would like to do, but our finances won't stretch to that. I'm only able to apply Sierrablen three times a year, plus the occasional green-up before major events.

What impressed me was that there wasn't a tractor in sight, as nearly all their work is done with pedestrian machinery. As well as the Dennis cylinder mowers, the team have three John Deere pedestrian rotary mowers, with rear rollers, which are used for lifting the grass and cleaning surface debris.

They also have a pedestrian chemical sprayer which, again, limits the weight on the playing surface.

I have a Toro triple mower which, although it gives a nice cut, doesn't compare to the finish the pedestrian cylinder mowers achieve - and they also give a light roll.

Most of my other work is carried out with tractor mounted machinery.

They have three small lighting rigs which are used on the pitch all year round; that's something else I would love to have.

All sides of the pitch were being replaced with artificial turf. This was to enable shuttles and warm-ups to be done off the pitch. Again, this is something I would like to introduce on my pitch.

Molineux is a lovely stadium, but, personally, I don't think it needs to be made any bigger, as it has a very homely feel as it is, but what do I know? Currently, it has a

I'd like to thank Wayne and his staff for allowing me to experience, at first hand, how a Premiership grounds team prepare for a match day, and to Pitchcare for arranging the visit. I should also thank Man U for banging in five goals!

I came away with some valuable tips, which I would love to put into practice. Now, where did I put that lottery ticket?