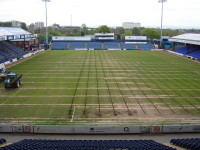 Two consecutive harsh winters have been enough to test the mettle of the most stoical of Groundsmen but if your pitch is 'double duty' and under the public gaze you need the heart of a lion or in Lee Horton's case the strength of a shark.

Arriving at Edgeley Park 12 years ago, Lee Horton found a ground owned by Stockport County and used solely for football. By the time he'd worked his way up to Head Groundsman, five years later, Edgeley Park had been sold to Sale Sharks Rugby Club but was also being rented back to the previous owners. The ground was now 'double duty' and hosting around 23 football games per season as well as approx. 20 rugby fixtures.

"We've got the Manchester Senior (football) team and the Youth team using the pitch as well as the Sharks," he says "and during the European Cup the away team can train on the pitch for up to an hour before the game starts. It's been a struggle, and obviously the usage has doubled the areas of heavy wear - the patch in between the 22 metre lines (rugby) and the goalmouths and centre line (football).

" On top of that the change in the weather over the last two years has been more than challenging. "The temperatures used to get down to minus two or minus four but we're now experiencing minus ten to minus fourteen degrees," Lee continues. "We've got a bit of shading down one side and during the worst of the winter we were using three sets of frost covers, but you can only use so many and you risk taking the grass off when you remove them."

As Lee says, once the frost gets in it takes a lot to warm the pitch up and even one inch of snow is a lot when it covers the surface of an entire stadium. 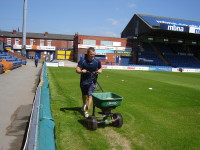 During the 2009/2010 season Lee and his team of two full time and one part time groundsman had to contend with eight inches of snow, some of it lying on top of the frost covers. When it wasn't snowing it was raining and these conditions, combined with the heavy usage highlighted a drainage system that was not performing. "The pitch just wasn't draining," Lee remembers. "It just wasn't playable." After a home rugby match with the London Wasps was cancelled because the Wasps' coach declared the pitch 'dangerous,' (although Lee has seen visible standing water on pitches where games have gone ahead), it was decided to address the drainage during the off season.

"We called in J Pugh-Lewis, and James (Pugh-Lewis) and I saw that the old gravel slits were not working and nothing was getting down to the drains," Lee explains. "We dug a hole, poured a bucket of water in and one hour later the water was still there. We decided that we needed a completely new drainage system."

"The old system had pipe drains and sand slits which I imagine had been in for 12 to 15 years," says James. "We dug down in a few areas and found the same story all over. The aggregate used to backfill the sand slits was completely clogged up, as was the lytag above the pipe drains. The result was that the surface stayed waterlogged for longer after rain and because Edgeley Park has a dual use you can't avoid using the pitch when it's wet. This had upset the balance of the root zone with silt and clay from further down the soil profile ending up on the surface and surface making things even worse, until it spiralled out of control."

J Pugh-Lewis came in on 7th May last year and installed new pipe drains down the side of the pitch followed by laterals at 5 metre centres which were all connected to the original outfall. Sand slits at one metre centres, running the length of the pitch were installed above the pipe drainage before Premier Pitches stripped the existing turf from the surface using a Koro Fieldtopmaker and re cultivated.

"We then took the opportunity to increase the fibre sand concentration to put it back to the recommended level," James explains. "The actual root zone was very good. That's what was so bizarre about this pitch. If you'd looked at it on paper you would have said it was 'spot on' for football and rugby. It was a nice sandy soil and free draining for the top four inches, but underneath it was doing nothing."

Premier Pitches laser graded and seeded the surface and the new pitch was ready for the first fixture, a League Cup game at home against Preston in the 2nd week of August.

Has it all been worth it? "There's a massive improvement in the drainage," Lee reports. "We spent a lot of money in the summer but the pitch needed it. We'd been getting by year on year. Because of its dual usage conditions are never going to be ideal, but now, whatever happens with the weather next season we've got no problems with water-logging."