0 Sharpen up your Turf Health

A nationwide roadshow of seminars, organised by Syngenta and Bernhard and Company, has provided greenkeepers and turf managers with key tips and advice to promote healthy turf ready for the rigours of winter, along with the latest research and findings of leading US turfgrass advisor, Professor Karl Danneberger.

Greenkeepers will get better results from all inputs and every action if they cut turf with a sharp mower blade that is correctly set-up, according to Steven Nixon, UK & Ireland Sales Manager for Bernhard and Company. "A clean cut from a sharp mower blade minimises stress on the turf plant. Turf cut with a sharp blade expends less energy trying to repair the damage caused by a blunt blade, so it's better able to withstand disease attacks and make more efficient use of fertiliser, fungicides and water," he says.

Speaking at a series of seminars to 'Sharpen up your Turf Health' last week (12 - 16 October), organised jointly by Syngenta and Bernhard and Company, Mr Nixon highlighted that a clean cut caused less 'bleed out' of essential moisture and nutrients, reduced the risk of disease infecting an open wound and, significantly, slows down growth to maintain a better finish for longer. 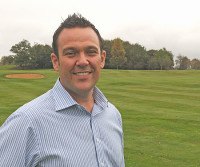 "A mower set with a contact cut - contact made between the cylinder and bed knife - traps and pulls the leaf until it shears at the weakest point. The turf subsequently grows faster to compensate and repair the damaged tissue" he reports. "That leads to the dull grey/brown fuzz that typically appears in late afternoon as the damaged leaf tips die back."

With a clean non-contact cut - where the mower is set with a two to three thou gap between a sharp cylinder blade and a sharp bed knife - the improved finish will remain all day and keep greens putting more consistently. A clean cut also enhances the ability of turf to cope with other stresses, such as sand topdressing or aeration, and gives greater flexibility in timing turf maintenance operations, he adds.

Mr Nixon also points out that contact set up between the mower blade and the bed knife creates immense friction, which is akin to driving a car with the handbrake on; it's incredibly inefficient and puts extra strain on all the working parts, including the engine, bearings and rollers. It is effectively wearing out the mower faster.

"Our experience, confirmed in subsequent STRI trials, has been that a non-contact set up will significantly preserve the life of mower blades and the bed knife. Even though you may be sharpening the knife more often - typically two or three times a year - only taking off a little metal each time to hone the edge is a lot less abrasive than an intensive regrind to get an edge back on a blade that has been repeatedly back-lapped," he claims.

Mr Nixon also questions the wisdom of sending mowers off for annual refurbishment and sharpening in the autumn, when worm casts and the results of winter turf maintenance operations are likely to quickly dull the blades. Optimum sharpness is really required during the spring growth flush. Come the autumn, dull blades will be creating the most damage and put severe stress on plants, at a time when they are exposed to the greatest threat of Fusarium Patch infection. He urges turf managers to undertake a winter rebuild on mowers, but give the blades an essential sharpen in early spring.

"Back lapping may be necessary during the season where turf managers don't have access to a grinding facility," he admits, "but at best it's creating a cutting effect that works like pliers, rather than the clean shave of a sharp blade." Bernhard and Company are manufacturers of the Express Dual and Anglemaster sharpening system.

Turf managers can minimise the visual impact of disease this autumn by identifying key periods when infection will strike, and applying appropriate fungicide at the right time to stop the symptoms breaking out, according to Syngenta Technical Manager, Dr Simon Watson.

Independent STRI trials have repeatedly shown that better targeted pro-active applications prior to periods of high Fusarium Patch risk over the autumn and early winter, as indicated by the GreenCast disease forecasting model, can maintain better turf quality than either treatment at the first signs of disease or routine monthly applications. "What's more, the pro-active treatment achieved the better results in turf quality from fewer applications and at lower cost over the course of the season," he reports. 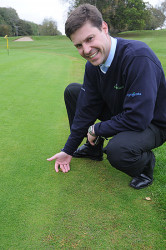 Dr Watson highlights the aim of his disease control strategy is to initially minimise the level of disease inoculum present in the turf, and then to make conditions as inhospitable as possible so that populations do not build up to damaging levels. "Integrated Turf Management (ITM) practices are all about limiting the disease population, to a level where it does not cause turf damage. Getting the drainage, aeration and fertility right, as well as turf maintenance - including cutting with a sharp mower - are all essential steps.

"When weather conditions change and become conducive to disease, however, pro-active fungicide applications will be required to stop the disease population building. Where turf is being managed with a good ITM programme, there is greater assurance of success, and the potential for effects to last longer," he adds.

He advocates all turf managers sign up for the free on-line disease forecasting with www.greencast.co.uk that will give up to five days advance warning of risk levels for all key turf diseases. "Armed with this knowledge they can select the most appropriate fungicide to tackle the disease threat.

"Where turf managers can get ahead of disease and apply as spores are landing on the leaf the preventative systemics are most effective, with Heritage applications when growing conditions are good, or the fast acting Banner MAXX during spring and autumn when growth is slower," he advises. "If applications have been delayed and there has been time for spores to germinate and penetrate the leaf - but still before any signs are visible - the curative Daconil Weather Stik can buy extra time in preventing disease damage occurring . This is even more important going into the autumn when slow growth means the turf can not recover from disease attacks."

Dr Watson adds that even if disease has broken out, fungicide treatments will protect unaffected areas of turf that will inevitably be subject to high disease pressure from sporulating lesions, preventing further disease spread. Heritage is also effective in preventing spore release and drying up disease lesions. For a simplified approach, multi-active fungicides, such as Instrata, target diseases at different stages in the life-cycle and allow greater flexibility in the application timing.

Avoid cuts in the economic crisis

Guest speaker at the Syngenta and Bernhard and Company seminars, leading US turf researcher, Professor Karl Danneberger of Ohio State University, reports cutting back on management and inputs in the current economic crisis may have limited visible impact on turf health and course quality in the short term, but next season things will start to go awry and, after a couple of years, all the long term benefits that have been built up will be lost. And once members start to see turf quality slide, they will quickly move to where it's better, he predicts.

"Accepting that all golf clubs are under intense financial pressure - and the situation is probably worse in the US than in the UK - turf quality remains imperative; turf managers need to smarter about using the inputs and budgets that they have more effectively and efficiently," he advises. One trend he has noted in the US is greenkeepers is less of the invasive verticutting and more brushing on greens.

Further cost savings have been achieved through more widespread use of growth regulators to manage turf more effectively, primarily Primo MAXX. In addition to the opportunity to reduce the frequency of mowing on fairways where playing quality permits, on greens and tees the mowing is faster with fewer clippings to remove; it all adds up to significant reduction in time and labour requirement - as well as reduced wear and tear on mowers. "Furthermore, with turf in growth regulation, the greens cut cleaner and stay looking neater for longer, to maintain a higher quality playing surface from less intensive management."

Professor Danneberger also cites trials that have shown a 15 to 20% reduction in Anthracnose on stronger, healthier turf treated with Primo MAXX. "It also appears to make sand topdressing more effective, which in turn gives a firmer surface for better mowing and a cleaner cut. A cleaner cut in turn leads to less disease invasion."

But he warns that using a growth regulator is not a replacement for nitrogen; "if you back off the N too far now, then you are sure to see the impact of Dollar Spot and other diseases coming in soon. We've already seen the effects, and it's not a route you want to take," he adds. "Primo is an add-on to help turf quality and more efficient management."