by External
in Industry News, Renovations & New Builds, and Football
on 11 Jun 2015

0 Shay turf war could finally be at an end 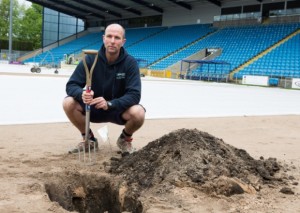 New drains will be installed under the surface while a state-of-the-art sprinkler system will also be in place.

Several Town games have had to be postponed last season, while they were forced to move an FA Trophy game with Dartford to Droylsden in February when the Shay pitch was deemed unplayable.

"It was a nightmare," Osbourne said. "Every time it rained or you looked at the weather forecast from January onwards was just a nightmare. It was really bad and it maybe even cost Halifax promotion. I think we had five games-in-hand at one stage and if we'd won them we could have been right up there.

"It just shows how important the pitch is really."

But Osbourne is now confident those days are gone.

He said: "It should solve the problem but like anything else it's got to be used correctly. It's got to have limits of what games it has on it, not just constant use. If you spent £1m on it and over-used it, it wouldn't make a difference, you'd just waste your money. Especially with it being a dual-use ground, it's got to be sensibly used and maintained.

"It's still an ongoing thing but hopefully this should solve it now."

For the full article, visit here.