0 Sheep herding at the Vale

Sheep herding at the Vale 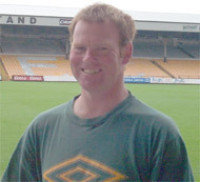 I've been here at Vale Park for just over 24 years. When I first joined the club I knew that the club was going through difficult times. I started on a May Bank Holiday, at the end of the season when the local cup finals take place. I had 5 games in the one week - and I wondered what hit me! I had to work every night.

I'd always wanted to get into football or cricket, so when this opportunity came up I took it. I started as the assistant to the Head

Groundsman and I continued with my college courses, which I'd been doing during my previous 18 months with the Stoke Parks Department.

I've been Head Groundsman now for 13 years. Like most other Groundsmen, I have enjoyed some good years and some not so good. The team's done well on occasions; the most memorable was beating Everton and Leeds here. That year was really nice because we had the money to rotovate the pitch at the end of the season.

Over the years, drains had been put in here, there and everywhere. The chairman had said the pitch wanted more drains in, which we did against my better wishes. They were put into the clay subsoil in small trenches, not really a great idea. The following season the pitch played exactly the same, so I was then told me to do whatever I wanted - within reason! I was given £5,000 - a lot of money at the time, about 8 years ago. We turned over the entire surface. We used a stone burier and put on 120 tonnes of sand and levelled.

I looked at the pitch, which is probably one of the biggest playing areas in the country, with no grass and at the time I thought, "Have I made a mistake!" We seeded and, within 4 weeks, I was cutting. The manager kept coming around to see how things were going and after 2 months he was complimenting me on how good it was. The manager was John Rudge at the time and he said he had never seen the pitch as good. That was pleasing.

That year the pitch was great, we played 77 games, we hardly put a divot back in. We aerated with a vertidrain at the beginning of that season and again in December. We were very lucky because we got some dry weather each time just before we vertidrained.

Since then my plan has been to vertidrain the ground 4 or 5 times a year and put on 150 tonnes of sand during each season. Unfortunately, in recent years things went badly for the club. We were relegated, which meant we lost a chunk of the TV money. At the same time we were building a new main stand and spending £250,000 on a training ground. Things went from bad to worse and one of the areas for cutbacks was the ground and Groundsman.

The club went into administration six months ago and, actually, things have got a bit better. The administrators do look in detail at the running of a football club and, of course, the pitch is an important part. I did get some fertiliser, but I also had my big mower repossessed. That wasn't too much of a problem because it was December when it was taken back. I told the administrators we could manage without it for 4 months, which actually saved quite a lot of money.

We were taken over in May by the new consortium, and the first thing the directors did was to buy a new mower, mainly for use at the training ground. So far, everything has gone right. We seeded at the right time (paid for by the administrators) and the pitch is better than it's been for a long time. The season finished on 3rd May after week of local cup finals, we like to host some of these, because we feel that we're giving something back to the community.

We were seeded up by the 7th May; we did some of the work in house and used a local contractor, Richard Campey to do the rest. We scarified with a Sisis rake on the back of the auto track, and got rid of the debris off the surface. We then spent 2 days spiking with Sisis slitters to about 6 inches before vertidraining to about 10 inches. That's as deep as we can go before hitting bricks. With the subsoil being Marl loam, the upper profile of the pitch has been built up, but it's been capped with clay. There is all sorts of rubbish underneath including old rotting oil drums, so we have areas sinking from time to time. The Campey boys did the top dressing and seeding. Straight after the seeding we had a nice drop of rain for two weeks.

We are now two weeks before the first game, the pitch has thickened up nicely, and I have planned a weed kill and fertilising operation. I am cutting the main pitch every other day and the training ground every day. On the main pitch I cut with a 36" Dennis Mower. In the winter we use a 30"Atco, which is lighter, and avoids too much compaction, it also produces a super cut.

Around the ground, when we re-developed the stands, we filled in 15 or 16 air vents and pit shafts. Since I've been here, we have had 2 open up - 1 at the back of the West stand. We've filled most of them in but we know there is one somewhere around the pitch. We just touch wood every time we go on there!

There is a good story about our new training ground, the Chairman at the time wanted to have the players closer to the club, the local council had an area just outside that was used for local football. The pitches though were on a fair slope, but the council were happy to let us use the land to build a new training ground. I was asked to get prices from two or three of the big contractors. It was a big job because of the site levels; there were variations of between 2 and 4 metres. Even though there had been football pitches on the site previously, it was a big slope.

The contractor's prices came in at about £320,000. I remember going to see our chairman, who just looked at the quotes and then ripped them up in front of me. He said, "we have builders doing the stand, Tarmac, so liase with them and do it yourself." I spoke with them and I ended up supervising the work. Tarmac was very good to us. I sat down with their rep and told him what I wanted. He said it wouldn't work, he said it would be too dry. But I told him it was what I wanted, so he priced it up the materials and it came to about £130,000. For this club, that was still a lot of money.

After levelling the pitches using the cut and fill technique we dug the trenches for the drains. We put a membrane in the trenches and across the rest of the ground and dropped the drains in ourselves, topping up the trenches with gravel. We then put on and levelled a gravel carpet about 4 inches thick. Following the gravel we spread about half an inch of grit on top to blind the gravel and stop the fines from the upper rootzone filtering down. With the grit in place, 4 inches of sandy rootzone was spread and graded and we then mixed 600 tonnes of Mansfield concentrated fibres into the rootzone.

Eventually we seeded the area and it has since gone quite well. The training ground now gets used virtually every day during the

We have a 1,000-gallon tank for irrigation with a tap by the main pitch and, if required, we can water the training facility with our 4 travelling sprinklers. Sometimes we use it on the main pitch in the morning before matches, with all four running it takes about 2 ½ hours to do one pass of the pitch. The irrigation helps immensely, last Monday was our first day for pre-season training and of course the temperature was in the high nineties.

Like many smaller clubs, you get asked to get involved with other aspects of the club. Last season, as I have a club van, I helped out with the kit, which meant I was able to sit on the bench at some of the away matches. We didn't lose, so they kept inviting me back. I enjoyed that because you see a different side to the club. It also gave me a chance to meet other Groundsmen and exchange ideas.

I like my football but I also like cricket. I look after the square at a local club in my spare time. It's a totally different challenge to get that perfect batting track.

We have 2 staff here. We used to have 3 but, during the administration, one of the team decided to leave and he hasn't been replaced. The young apprentice I have with me here attends Reaseheath College on a day release, 3-year course. I might take another apprentice on at the start of the season to help out with our daily duties. I am a strong believer in education, especially with issues such as Health & Safety, spraying etc. For youngsters coming into the industry there are great opportunities, not just in grounds maintenance, but also in greenkeeping with so many golf courses around.

Everybody wants to see football played on perfect playing surfaces, but it all boils down to how much a club are willing to spend on the pitch. The last few years have seen some big changes, there are now five substitutes on the bench and warm ups have developed into full-blown training sessions before the game. We're very lucky here because there is perhaps ten metres off the playing surface for the teams to warm up on, but you go to other grounds where space is limited and it's absolutely criminal what teams do to the surface before the game starts.

A Groundsman could spend all his time in the build up to a game getting the surface ready for Saturday, knowing perhaps that there is another game on the Tuesday and maybe a youth cup match on the Thursday. The opposition team especially, may come in and tear the pitch to pieces, unaware that there are more games due to be played soon after. Very often, they are unaware of the consequences of their actions. Our manager, Brian Horton, has threatened to go back in the return match and do the same, but I've asked him to show restraint, after all, it will only be the Groundsman who has to work harder to restore the surface.

To finish, I'd just like to clear up a story that appeared a couple of months ago in the national press. We have about two acres of land that forms a steep bank behind two of the stands. The bank is grass, and is really quite dangerous to maintain. All we can do is strim, but it's hard even to stand up on there in places.

In the past we've called on local farmers and put a small flock of sheep on the grass to graze. This saves us at least a day a week strimming in the summer months. This year I'd asked The Sentinel, our local paper to appeal for some sheep, but this was picked up by the big tabloids and twisted into a piece saying that Port Vale were to use sheep instead of their Groundsman to maintain the pitch. If only life were that simple!

The sad thing is no-one came in and offered us any sheep, so we've had to strim the banks ourselves this summer.