0 Sheffield to groundshare with Doncaster in 2015

Sheffield Eagles have confirmed that the club will play their home games at Doncaster's Keepmoat Stadium in 2015. 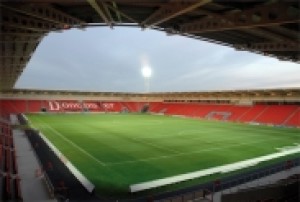 The Eagles' Olympic Legacy Park will be under construction for the next year and the club's move to the Keepmoat Stadium will see regular Sunday afternoon double headers with Doncaster games kicking off at 2pm and Eagles following on at 4:15pm.

Sheffield Eagles head coach and chief executive Mark Aston said: "It's a great stadium and one we have really enjoyed playing at. It's a little disappointing that we are not in Sheffield but I hope and know that the people of Sheffield will understand.

"It's for 12 months, after which point we hope the new stadium will be up and running and we'll be back in Sheffield.

"It's a fantastic facility and we will be able to play the sort of football we enjoy playing. Get behind us and let's get on this journey."

Doncaster chief executive Carl Hall said: "We were approached by Sheffield about the possibility of a ground share and have spent a vast amount of time considering the proposal.

"Our main concern was ensuring that the pitch wouldn't suffer from the extra matches taking place and, having taken advice from some of the top people in grounds maintenance, we've been assured that it will not.